August 09, 2009
Yesterday, I had the pleasure of visiting my parents and getting out an old computer. One of the first computers I used a lot was the Sharp MZ-80K which was sold from 1979 to 1982. I was but a wee bairn, but this is the first machine I really programmed. First using BASIC and then using Z-80 assembler (and sometimes by typing in characters directly on the screen corresponding to Z-80 opcodes and then calling the address of the start of screen memory to have the program on screen executed).

My parents have a Sharp MZ-80K that I purchased as a nostalgia item some years ago. Yesterday I fired it up for the first time and was straight into the boot ROM. Oddly, I could remember everything about the machine's operation and shoved a cassette tape containing SP-BASIC into the tape drive, hit play and typed LOAD.

The machine duly loaded SP-BASIC and gave me the prompt.

Then I did the real test. After poking around and finding a tape of my old BASIC programs I typed LOAD again and explored the tape. 30 years on all the programs loaded from tape just fine and executed. I was able to spend a happy few hours playing character-based games that I wrote.

Here's a screen shot of the listing of one such game: notice the J.G.C. initials at the start. This was one of the few programs I put my name in (I think because it was clearly co-written with A.S.). 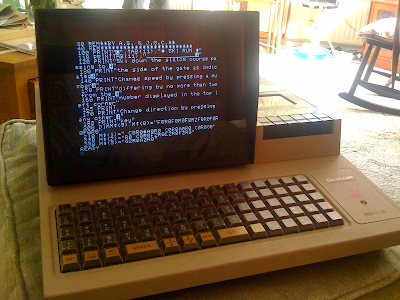 I put the survival of that tape down to two things: my parents careful handling of a box of Sharp MZ-80K and BBC Micro tapes and my obsession at the time of being the highest quality CrO2 cassette tapes available: "It is still considered today by many oxide and tape manufacturers to have been the most perfect magnetic recording particulate ever invented."

Justin Mason said…
you were lucky! my parents threw out all my diskettes at some point in the mid-90's -- including every copy I had of the many demos I'd written for the Commodore 64.

Luckily some guy at the CSDB found a copy of a few of them recently, and managed to get in touch somehow, so I was able to get my hands on this one at least:

John said…
Nice post. Brings me back -- not quite as far back, but back. I fired up my old Commodore 128 one day and loaded a program I wrote as a kid, around 7th grade. Surprisingly, it still loaded and ran. It used graphics heavily, with buttons that had mouse over states and click to navigate to different pages (including a back button :-) No kidding. Boy, that was fun to write. And best of all, it was one giant loop with goto statements. I had no idea what I was doing, but I sure enjoyed doing it.
2:00 PM

Thanks for the post, brings back so many memories of all the various "first" computers from childhood friends in my neighbourhood.
4:38 PM