I don't like pie charts. I don't like them because they fail to convey information. They do that because people have a really hard time judging relative areas instead of lengths. Wikipedia mentions some of the reasons why pie charts are generally poor.

I'd go a little further and say that pie charts are really only useful when a small number of categories of data are far, far greater than others. Like this image from Wikipedia of the English-speaking peoples: 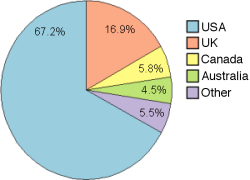 Yep, there are lots of Americans.

Once you get data that isn't widely different or you have lots of categories your pie chart would be better as either a bar chart, or as simply a data table. Here's a particularly bad pie chart from a blog about Microsoft Office. It depicts the number of features added in various releases.

Literally eveything is wrong with this pie chart. The data being presented is the number of features added per release. Releases occur chronologically. So an obvious choice would be a bar chart or a line chart for cumulative information with time going from left to right. Instead we have to follow the chart around clockwise (finding the right starting point) to follow time.

And since the releases didn't come out at equal intervals it would be really nice to compare the number of features added with the amount of time between releases.

The pie chart has no values on it at all. We don't get the actual number of features, or just the percentage added. So we are left staring at the chart trying to guess the relative sizes of the slices. And that's made extra hard by the chart being in 3D. For example, how do Word 2000 and Word 2003 compare?

But if you still must use pie charts, I beg you not to use 3D pie charts. Please, they are simply an abomination. Making them 3D just makes them even harder to interpret.
Posted by John Graham-Cumming at 12:48

Email ThisBlogThis!Share to TwitterShare to FacebookShare to Pinterest
Labels: rants and raves

I felt exactly the same way when I saw that Word pie chart. Horrible.

You speak the truth.

Lol, wow. I saw this 'Word' piechart on a link from HackerNews, and i was thinking the same exact thing, what a horrible, horrible pie chart.

A pie chart with just 2 or 3 categories is VERY effective.

Do more people have cats or dogs?

If the piece of pie has a bigger section for dogs, then it's done it's job quite well.

However, if there are a 5 or more oddly shaped wedges, I agree completely.

I saw that pie chart this morning too (on Ars Technica, if I'm not mistaken). First word that sprang to mind was 'rubbish'. Pie charts are rarely used effectively.

Playing devil's advocate here a bit, (because I hate the Word pie chart too), but using a time-based x-axis for that is only interesting if you're showing differences over time. They weren't, they were showing the differences over releases. They are chronological but that's not the point here. I think perhaps a stacked bar would have been a better way to go though.

Pie charts are indeed hard to read. However if you leverage past pie-eating experience you can improve your interpretation. Just imagine the pie chart is actually made of your favorite pie and you are being served the various pieces. How do you feel about the different sized pieces? Your experience will be much more nuanced than a bar chart ever could achieve.

You forgot to mention the ingenious re-use of colours.

This is a great post with a highly interactive tool that demonstrates all about the problems of information display:

It takes the "Pie charts are bad, mmmkay?" to the next level.

@BenMc
A pie chart with just 2 or 3 categories is VERY effective.

Do more people have cats or dogs?

If the piece of pie has a bigger section for dogs, then it's done it's job quite well.

I disagree. If you want to compare quantities then pie charts are hardly ever a good idea; even with 2 or 3 categories a block chart would give a much clearer answer to the question which pet do more people have.

Pie charts are useful exactly when small differences don't really matter, like in the English-speaking peoples example: what matters here is that the US has by far the most English speakers, with the UK a clear second and Australia and Canada "more or less equal third". If it did matter that Canada has about 25% more English speakers than Australia a block chart should have been used.

your examples don't do your argument justice. I see what you are getting at, but the info that the graphs are trying to convey is done with the pie graphs. Sure a different kind of graph could have been used, but any person with an IQ above 50 will understand the pie chart. The visualization of the pie segments easily portrays the number of features introduced in each version of word (which the graph is portraying -- and honestly, you don't need concrete numbers -- the general idea is there) If you want the nit-picky details, read the freaking user manual.

@dasil003 - you could make a column chart with frankfurters if you want that kind of reaction!

Some people use pie chart in a very ineffective way. That's all. Pie chart is as good (& bad) as any other chart--you just need to choose the right one to show what you want to show the most.

Only good use of a pie chart
http://yfrog.com/kiz0xuzsj

Only good use of a pie chart
http://yfrog.com/kiz0xuzsj

Also, Pie charts a a pain in the ass if you're colour blind.

Pie charts do have some advantages but not many