A final reply about awarding a Knighthood to Alan Turing

June 20, 2010
Last October I posted the reply I received from Buckingham Palace in response to a letter I wrote to Her Majesty The Queen suggesting a Knighthood for Alan Turing.

The Palace had forwarded by letter to the Cabinet Office. Here's their reply: 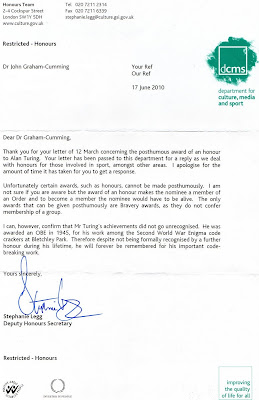 I'm not sure what this has to do with sport (which the letter highlights), but I suspect there's some confusion because I didn't write to them on March 12 about a Knighthood (that was on the separate matter of honoring Turing at the 2012 Olympics).

Nevertheless, I'm not going to push any more for the Knighthood.

Unknown said…
I think he should be awarded a knighthood. If rules must be changed then change them. Turing did more than just crack some codes, he saved many people.
4:15 PM