July 10, 2010
The early bird truly catches the worm. I woke up at 0530 this morning and couldn't go back to sleep. After dealing with email etc. I was able to get to the Apple store to see a Genius, browse around in Maplin, go to the Post Office and be back home by 1000. So, then I started browsing around a bit for a project I'm slowly working on: sending a balloon up into the stratosphere to photograph the Earth and space (more on that in a separate blog post).

I wandered over to the UK High Altitude Society web site and idly clicked on Current Launch. I had to read the date 10/07/10 about three times before I realized that it was today, that I could make it to Cambridge for the launch if I moved it.

I quickly Twittered to James Coxon to see if I'd be welcome. I was. I grabbed the Jack Pack and stuffed it with journey essentials: iPhone, Kindle, Oyster Card, Camera and Power Monkey and raced to Cambridge via Kings Cross.

I arrived with enough time to sit down with Nathan Chong of Newstilt for a chat about really cool stuff that he's working on. And then it was off to Churchill College to met James, Ed and cohorts. They were incredibly welcoming (especially, since I had invited myself along) and answered all my questions about the launch of BallastHalo 5.

BallastHalo 5 was a test launch as part of a plan to send a balloon across the Atlantic:

BallastHalo 5 is the most recent payload in a series of launches to test ballast tank concepts in anticipation of a trans-atlantic balloon launch. A successful trans-atlantic launch would require the ability to drop ballast at night to counteract the loss of helium from the ZP balloon during the day.

Here's the primary payload that was launched. It contains two main components: a microcontroller that talks to a GPS to get location information and then relays that information via a low power and slow data link to the ground; a system for dumping ballast (surgical spirit) to lighten the balloon as needed. The first picture shows the internals, the second shows the assembled unit hanging from a tripod. The payload circuits are inside a polystyrene box that's covered in reflective foil to keep the heat in: it's cold up in the stratosphere. 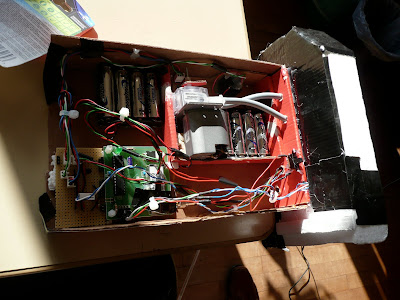 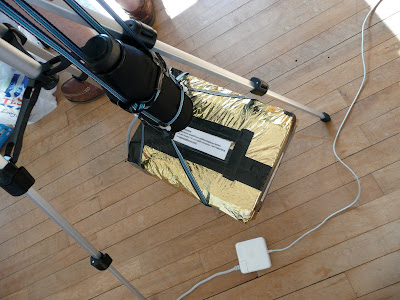 There's also a second transmitter sending out CW (Morse) and Hellschreiber in case the main computer fails. It can be used to find the entire device if lost (and has been in the past when previous flights have taken the box to the Netherlands and France). 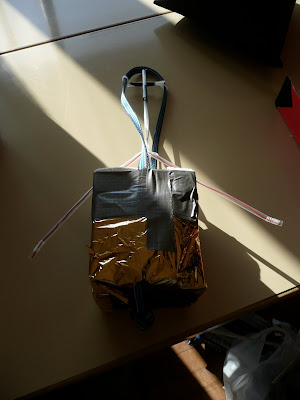 After checking all the electronics and the receivers we headed outside to fill the balloon, attach the parachute and launch. My role was helping to drag the 100kg helium bottle to the launch location and standing around staying out of the way. To get the balloon filled to the right lift a plastic bag was filled with Coke cans equaling the total payload weight (including the cord and parachute) plus the desired lift, and attached to the balloon. Once the combination had achieved neutral buoyancy there was sufficient helium for the flight. 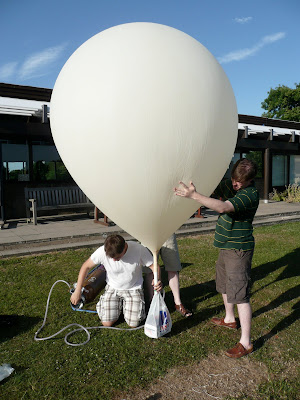 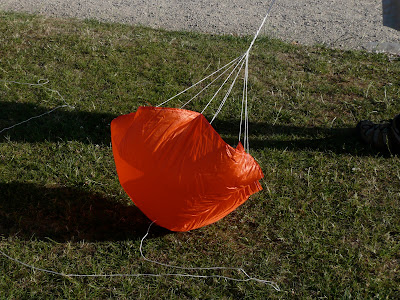 Once the balloon was filled the payload and beacon were attached along with the parachute and we moved off to the launch site about 200m away. And then the balloon was off.

And the balloon ascended beautifully downlinking telemetry to multiple radio operators around the UK. 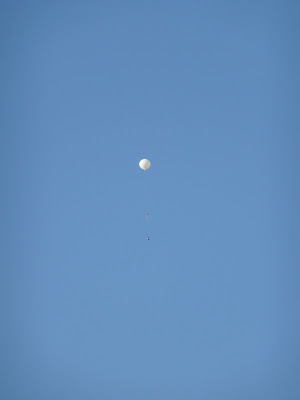 We returned to the college to watch the telemetry come in and follow the flight on the spacenear.us tracker. The balloon reached a maximum altitude of about 31km and flew for about 5 hours sending a clear signal all the way. Unfortunately, calamity struck when the balloon burst while the payload was over the North Sea and BallastHalo 5 descended gracefully into the water. On the way the emergency ballast routine was activated automatically to dump the surgical spirit as fast as possible to slow the descent. 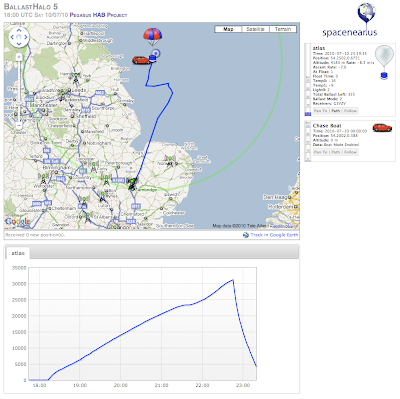 Richard Jones said…
What's the law about sending up balloons through air where there might be commercial planes? Do they inform ATC before launching?
9:40 AM

John Graham-Cumming said…
I'm working on a more extensive blog post about my own balloon launch attempt (which I am working on). It will explain more, but check out their FAQ: http://ukhas.org.uk/guides:faq
9:42 AM