July 18, 2010
The children's game One Banana, Two Banana is a high stakes game of probability theory in action. Or something like that. Actually, it's a fun game where you have to take probability into account when deciding what to do.

Conceptually, the game is simple. There are 54 cards of five types. Three of the card types have bananas on them (one, two or three bananas), one card type has a banana skin on it and one card type has a swamp on it. All the cards are placed face down on the table and shuffled about. Each player takes turns at turning over as many cards as they want. 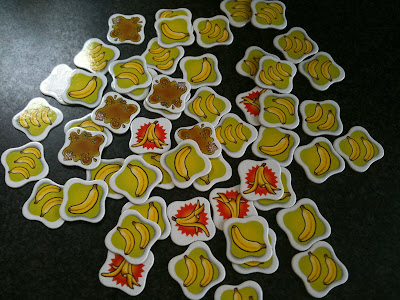 So I wrote a little program that simulates One Banana, Two Banana games (or at least board positions) and see what the expected score is depending on the number of cards that the player chooses to pick. I assume a very simple strategy of deciding up front how many cards to pick. A more complexity strategy would be to look at the score as the player turns over cards and decide when to quit.

And here's a chart showing the average score from the Monte Carlo simulation for each of the six possible numbers of banana skins on the board. The X axis shows the number of cards picked (or desired to be picked), and the Y axis the average score. 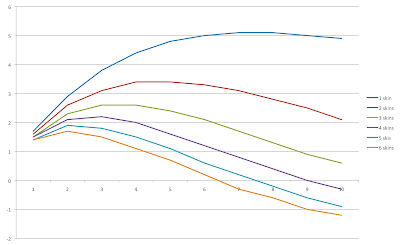 If you look just at the maximum scores for each of the banana skin counts, then a simple pattern emerges.

So, just memorize that pattern and you'll be a better player. And also, if you are player and have exceeded the expected score with fewer than the recommended cards you'll know it's best to stop. I've removed that sentence because it is not correct. That's a different strategy based on stopping based on the cards you have already turned over; that deserves a separate analysis to find the best strategy.

Watch out Vegas, here I come.