In 1826 Charles Babbage realized that understanding the internal state of his engines was an arduous task and in an extensive paper on the subject (On a method of expressing by signs the action of machinery) he writes:

In the construction of an engine, [...], I experienced great delay and inconvenience from the difficulty of ascertaining from the drawings the state of motion or rest of any individual part at any given instant in time: and if it became necessary to enquire into the state of several parts at the same moment the labour was much encreased.
[...]
The difficulty of retaining in mind all the cotemporaneous and successive movements of a complicated machine, and the still greater difficulty of properly timing movements which had already been provided for, induced me to seek for some method by which I might at the glance of the eye select any particular part, and find at any given time its state of motion or rest, its relation to the motions of any other part of the machine, and if necessary trace back the sources of its movement through all its successive stages to the original moving power.

In the paper he goes on to develop a notation that allows him to draw something similar to a sequence diagram for a machine. But his diagram is at a very low level: it describes the motion of individual parts of a machine. 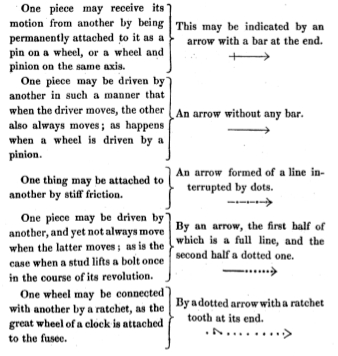 And he uses the notation to analyze the operation of a clock, drawing a large picture of the motion of each part of the clock and how motion of one piece influences another. From the diagram he is able to trace back the movement of the clock's minute hand to its original source of power. 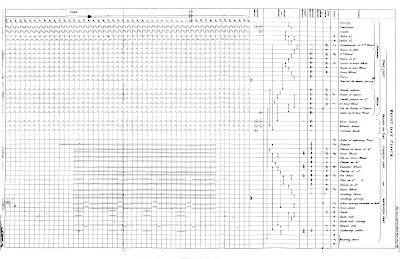 He concluded by saying:

The signs [...] will form as it were an universal language; and to those who become skilful in their use, they will supply the means of writing down at sight even the most complicated machine, and of understanding the order and succession of the movements of any engine of which they possess the drawings and the mechanical notation. In contriving machinery, in which it is necessary that numerous wheels and levers, deriving their motion from distant part of the engine, should concur at some instant of time, or in some precise order, for the proper performance of a particular operation, it furnishes important assistance; and I have myself experienced the advantages of its application to my own calculating engine, when all other methods appeared nearly hopeless.

Since, at that time, Babbage was concerned with creating non-programmable machines such as the Difference Engine, his notation is the closest thing possible to a debugger. It allowed him to understand the state of the machine at any moment in time and trace back how that state was reached.

Clearly, that's not quite the same thing as the way debuggers are used today, but for Babbage he needed to debug prior to making the machine. He was using a form of static analysis to ensure that a machine would work.
at September 15, 2010

Thats just straight out fascinating! Another proof that Babbage lived way ahead of his time, and generally, about 2 centuries too early.