September 19, 2010
So with a couple of hours to work on GAGA-1 this weekend I did one simple thing: painted the capsule fluorescent yellow. Most of the other high-altitude balloon projects that I've read about have used fairly simple capsules that are covered in duct tape, or simply left white.

I decided to make the GAGA-1 capsule really visible for two reasons:

1. I want to be able to find it. Since the balloon will most likely come down somewhere in Norfolk or Suffolk (both of which are largely rural), it's going to end up in a field somewhere. The flight and recovery computers should tell me where, but I still want to be able to see it clearly when I get close.

2. If the capsule with its parachute should come down near people or vehicles, I want them to be able to see if coming. I'll be using a brightly coloured parachute, fluorescent rope and, now, a fluorescent capsule. (I'll do another blog post of safety later).

The capsule is made of expanded polystyrene which is light and insulating, but a pain to cut and paint. It's not possible to use any solvent-based paints because they eat polystyrene in seconds. Here's a shot of a polystyrene ball sprayed briefly with paint. Note the ball next to it for comparison. 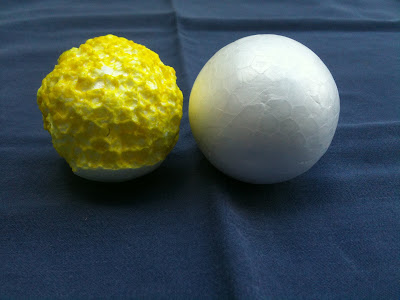 That damage was done in under five minutes.

The sandpaper worked great. In no time at all the surface was ready for painting. I used unthinned acrylic paint from a local art shop. 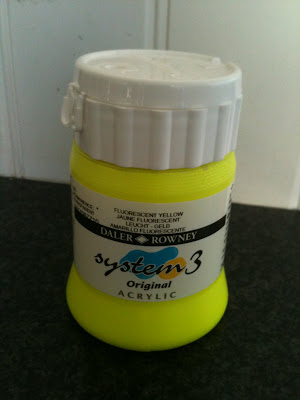 And here's the final result. These pictures don't capture the full 'my eyes, my eye!' brightness of the fluorescent paint. Here you can see the yellow but not how fluorescent it is. With this paint job it should be visible. 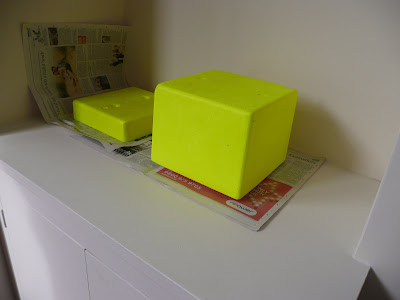 Of course, painting the capsule adds to the weight, but I think that's going to be offset by the holes that I need to cut in it for the camera lens and antennae. 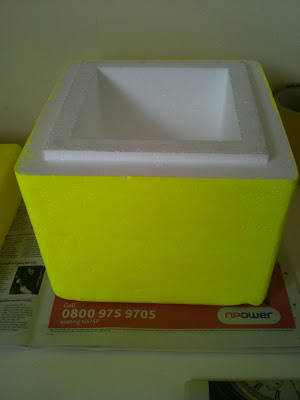 Once the paint has had time to really dry I am going to stencil on contact information so that if the capsule is lost someone can get in contact if they find it.

Dogsbody said…
I've always wondered about painting things yellow to find them in the countryside.

Admittedly yours is fluorescent yellow but unless it rains I find the countryside very grey and dusty. Just look at some of the colours that animals use to camouflage themselves (tigers, OK, not exactly native to the UK).

I forget when you are launching but the autumn leaves are already starting to fall which will be all sorts of yellow colours.

I wonder if there is a study anywhere? My guess is blue would been a good colour.
11:57 AM