September 13, 2010
The other thing that I did over the weekend was some initial work on the capsule. It consists of an expanded polystyrene box from Ferribox. Specifically, the XPS-2 which is a 245mm cube with an interior 150mm cube (i.e. very thick walls!) and weighs 200g (I'll dedicate another post to the weight budget but the whole thing needs to weigh less than 1kg). It has a fitted lid with a lip to keep it in place. Here's what it looks like: 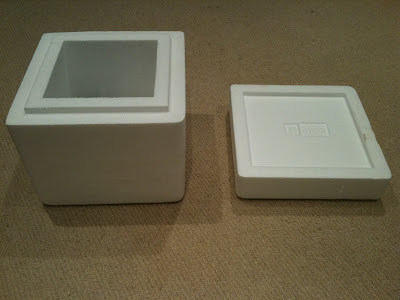 A quick sanity check of space inside shows that the cube will easily contain the recovery GPS (bottom right), main flight computer (top right) and camera (left). Clearly I'm not showing all the wiring, antennae, probes and power, but there's plenty of room: 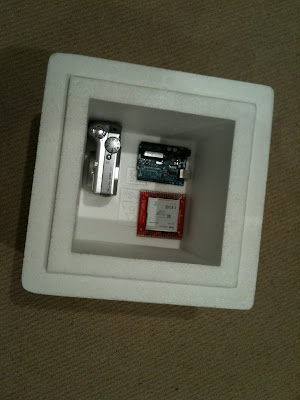 I plan to paint the capsule (with non-solvent based paint--those eat polystyrene) a very bright colour (probably fluorescent yellow) for easy recovery when it lands. The capsule will be attached to the balloon/parachute/radar reflector assembly by some nice nautical rope at each of the four corners. I have some strong, light-weight rope like this: 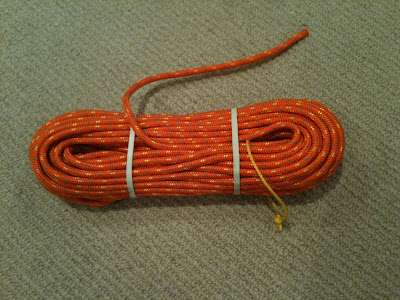 Since the stratosphere is at -55C there's clearly some temperature change to be worried about, hence the insulated box. Like everything else in GAGA-1 I've been testing and this weekend I did a rough and ready test of expected internal temperatures by abusing physics wildly and using my home freezer. 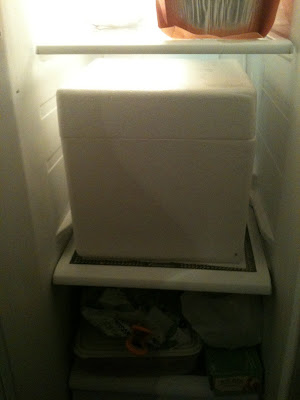 Here's the physics abuse: suppose the capsule is launched at ground level at 20C and rises at a constant rate to an altitude where the temperature is -55C and that the temperature gradient between ground and sky is constant then the average temperature encountered is (20 + -55) / 2 = -17.5C. Convenientely my freezer is at -18C so I decided to shove the box in the freezer for two hours to see what happens. Inside the box was a digital thermometer transmitting the temperature to an external monitor. I wrote down the temperature every 15 minutes.

Here's a chart of the actual temperatures (green) and the predicted temperature trend using Newton's Law of Cooling (red). X-axis is elapsed time in minutes, Y-axis is internal temperature in C. 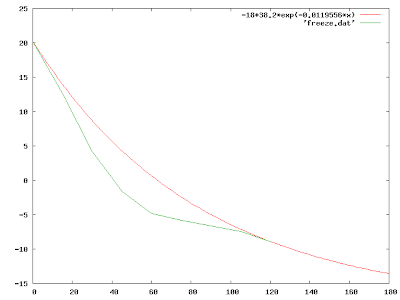 Given a maximum flight time of 3 hours the prediction would be for the internal temperature to drop to somewhere close to -15C. That's acceptable.

As well as abusing physics this calculation ignores two other pertinent facts:

1. There's actually a source of heat inside the capsule: the electronics. The camera, GPS and radio transmitter all heat up while operating so there will be some internal warming.

2. The box won't be completely sealed as holes will be pierced for the four antennae and the camera lens.

Will be interesting to see how the temperature really drops on the day.

Anonymous said…
Cool stuff. Some friends of mine are going through the same problems.