October 08, 2010
Tidying up my messy corner in the basement I unearthed one of my older "ideas books" in which I write down the random ideas that flit through my head quite frequently. Flicking through it I noticed that this book contained idea number 1,000 written on October 3, 2006. Most of these ideas never get implemented but they are fun to go back and read. 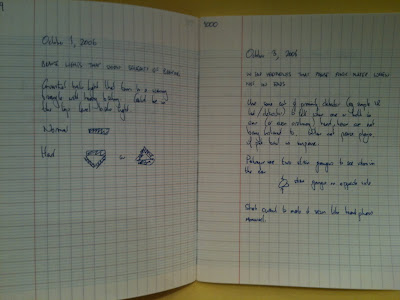 Idea 1,000 was In-ear headphones that automatically pause music when removed. The details mention using either a proximity detector to discover when the headphones are in the ear, or a strain gauge to detect the pressure of the ear canal.

The previous idea was Brake lights that show the severity of braking. The idea there was to replace the current 'high-level' brake lights in cars (that are typically a horizontal bar), with a triangle of lights. Under normal braking just the top, horizontal red bar would illuminate. Under heavy braking the triangle would illuminate warning drivers of an emergency situation (particularly useful on motorways at high-speed). Since the red triangle is a common warning symbol this would be instantly recognizable.

I've been filling these books since about 1992. By 2006 I'd had 1,000 (bad) ideas, which works out to about one every five days. Some of them I've implemented (such as l8tr), others I've seen implemented by other people: there's an amusing entry from 1995 about building a networked disk drive service that I wanted to call "I-Drive". The plan was to use FTP as the underlying protocol and make a drive (I:) appear in Windows 95. I: would actually be on the Internet and could be accessed by multiple machines.

The idea I'm most pleased with is my book, The Geek Atlas, because it was (fairly) original. No one else had written "Lonely Planet for Nerds". Overall, perhaps 10 of my 1,000 ideas look like they might be 'good ideas'.

Does anyone else generate ideas like this? And if so, what percentage turn out to be good?

Rors said…
All the time.

Thomas B said…
I don't know that I have had a thousand, but I do this, as well. My best ideas are the one's which attempt to solve my everyday problems.

The most notable for me was a bookmarking service that would replicate bookmarks across computers and browsers, which is what I use delicious for. I had that idea in the mid-to-late 90s I guess and that probably was already a stale idea then. Doh! Delicious was either in existence or started not too long after that.

Again a reason to not wait and simply create your solution. Other people are bound to have a similar need.
10:20 AM

Paolo G. Lim said…
this sounds like a very nice habit to form. i often think of random ideas especially on boring commutes. then when i get home, i just forget everything. such a waste! i better buy a notebook now!

Ruben Berenguel said…
I don't write them down, but I generate ideas... and most die within my own brain. I still remember being a teenager (around 13 or 14, considering which book I remember reading back then) and thinking that if sound was a wave, you could build an earphone with a microphone generating the reverse sound, thus making all silent. I thought wow, that should be cool! And 3 years later I read "how do noise cancelling earphones work" in SciAm... I didn't know what to think about that ;)

I think this idea of writing down the stream of ideas may be interesting... but I think the big failure rate would put me down pretty quickly.

Adam Conrad said…
WHAT!!! That's crazy, I came up with the same idea for brake light severity. I called them Cascading Brake Lights, and basically the brake light turned into a grid of LEDs. As you applied more pressure, the grid would rise, so if it was a 5x5 grid, light breaking would light up the first row, where severe braking would light up all 5 rows. I had a patent ready to be filed, but after speaking with a few patent lawyers and professors, the market seemed too difficult to penetrate simply because the introduction to the public would be difficult, coupled with it being difficult to see the differences, even at relatively close quarters, such as a traffic jam.

Cool to hear someone else was thinking the same thing!
2:06 PM

Matt Williamson said…
yeah, my brother in law wanted to patent spray bottle eye drops and then Visine came out with them. For you, the brake light levels have been implemented by BMW.
2:08 PM

Bob Hazard said…
I had an idea in the 90s for a car alarm that sends you a text message. You can get them for home windows and doors now too.

danio said…
I remember a few years ago my mother mentioning that a 1950s or 1960s car had an array of brake lights that showed braking intensity. Unfortunately a quick web search doesn't find anything.
Also I remember my dad suggesting orange warning lights to show when the driver has taken their foot off the accelerator (so may be about to brake). And then orange was chosen for turn indicator lights.
4:05 PM

I can't remember the name or author (possibly Heinlein), but I actually set about to build some years before they actually came to market.

I failed, but transistors just weren't fast enough then. The author should have patented the idea though. :)

I remeber the first time I saw them in the 'whats new' section of popular science, and just about cried.
6:05 PM

Anonymous said…
I've had a number of ideas that ended up being implemented months or years afterwards by others. The latest I've come across is Bing Rewards, though my version of it was on a much bigger scale.

I like the idea of writing down every single idea as it forms. That's a habit I'm going to cultivate.
8:43 PM

Unknown said…
Any thought on making this entire notebook available? I'd like to see some more of your ideas, I'm fascinated by ideas that will never see the light of day.
5:27 PM

John Graham-Cumming said…
I probably should make more of them available. Just need to find the time.
5:28 PM