November 20, 2010
Today was the first live test of the GAGA-1 Recovery Computer and it, at least initially, didn't go well. The result is much improved, fully working, code in the repository. This is why I'm obsessed with actual testing of the components of GAGA-1.

First the good news: the module ran on 4 AA batteries for 9 hours without showing any problems caused by power. For over 3 hours the module was getting GPS location information and sending SMS messages. This is very reassuring.

Here's the module sitting on the kitchen table ready to go: 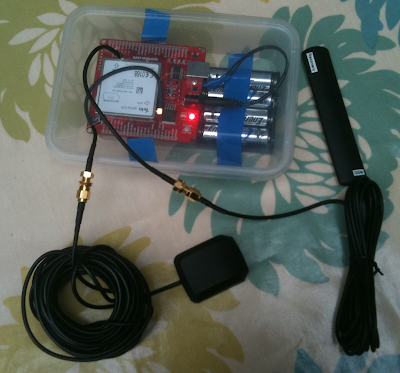 Here's the commit message for the code changes:

Significant changes based on live testing of the code on the Telit GM862-GPS module:

1. The module does not support floating point and so the gps2.get() function has been modified to only use integer arithmetic and thus not do conversion of latitude and longitude. This leaves most of the returned elements as strings. Except altitude which is needed for comparisons.

2. The main loop is wrapped in the try/except that will hide any inflight errors (although they will be logged to the log file). I hope this will never be called.

3. The timeout on SMS message sending has been increased from the default to 30 seconds because it can take a while to send the message and this was corrupting the return from the temperature command.

4. Improved handling of timestamps to make it clearer in the SMS messages when a message occurred.

5. Modified the upload script to delete the .pyo files for uploaded .py files so that the module will recompile and not use the previous version.

The floating point was a pain (and yes, it is documented in the Telit documentation). The SMS timeout was showing up in the log file as follows:

The first part (+CMGS: 161) is left over from sending an SMS with the AT+CMGS command and meant that the read buffer hadn't been flushed. Changing the timeout fixes this. The good news here is that my defensive programming style worked well in keeping the module running in under this error condition.

I ran the module for 208 minutes (3 hours, 28 minutes) sitting motionless in the garden reporting position via SMS every two minutes. Here's a graph showing reported altitude, number of satellites, internal temperature and speed. At the beginning I take the module out from the house (room was at 20C) into the garden (temperature was 7C) and at the end I bring it in again. 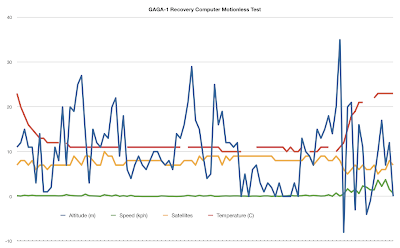 The gaps in the temperature record are where the problem in number 3 above occurred. The chart starts just as I put the module down in the garden; at the end you can see the number of satellites drop and the apparent speed increase as the module is brought indoors. The module seems to be running about 3C hotter than ambient temperatures.

Things to do on this part:

1. Shorten the leads on the two antennae and install in the capsule.

2. Run a three hour test in a moving car.

3. I am still very worried about the COCOM limit and am waiting for a response from Telit. In the worst case I'm going to add a watchdog to the code so that if there's been no GPS lock for an hour a complete reset of the GPS module is forced.