December 03, 2010
A few days ago an entry on Reddit asked for help breaking a code. Because I was laid up in bed yesterday with something chesty and nasty I couldn't help but wonder about the decryption of the message (see also the Fermilab code). At the time no one had broken it.

I managed to break it; here's how.

The original message was written on paper like this: 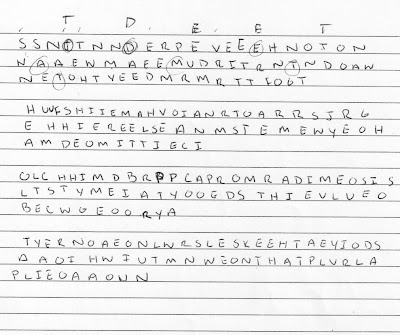 So I did my own transcription of the message and obtained the following four lines:

There were a couple of things that stood out immediately. Just eyeballing the text it looks like it's English (lots of E's, T's, etc.) and so I ran it through a letter frequency checker and sure enough it looks like English.

Then I went back and looked at the text. There are clues within it. First, it's broken into four separate rows and that's likely significant. Secondly the first row is one character longer. That made me think that character must be the last one in the message.

After much messing around with the order of the rows I discovered that reversing the first and third rows resulted in the word THAT appearing in the first column:

And, in fact, if you read down the columns from left to right (and add some spaces) you get:

Notice that I made a few transcription errors. I suspect that VOV is really YOU and CRVMPLED must be CRUMPLED.

Guess I'll have to get back to Kryptos now.

Someone should do something where we post a new code every day and see if people can break it. And score people.