December 06, 2010
This weekend's work on GAGA-1 was mostly around mounting the camera inside the capsule. The capsule walls are 95mm thick so a hole had to be cut all the way through for the thinnest part of the lens and then part way through for two other parts. A second trench had to be cut into the polystyrene for the part of the camera where the batteries are held.

The other thing I worked on was the positioning and mounting of the computers and where the batteries will sit. Here's a shot inside the box showing the camera pushed into place and flush against the capsule sides. There's a single battery pack in roughly the spot where it will be fixed and the recovery computer on the wall opposite the camera. The two gold connectors are the GSM and GPS antenna SMA connectors. 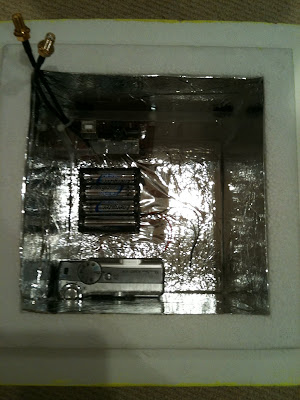 And here's a show showing the hole pierced through the capsule wall to allow the camera to take photos (yes, I have checked that the capsule wall is not seen in the photos). The recovery computer can be clearly seen at the back. I will be painting the hole the same yellow as the rest of the capsule just to make it look nicer. 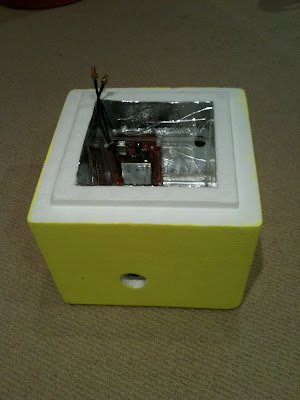 The hole was cut with a very sharp, thin knife. A bit messy but the end result is certainly good enough. Here's the camera in the hole. 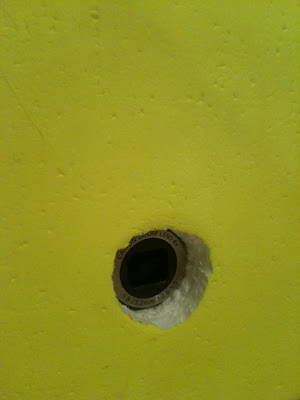 I insulated the trench with space blanket to keep the camera as warm as possible, but left the lens hole untouched because the walls are very thick there. The black circles are velcro pads used to help keep the camera in place during the flight. 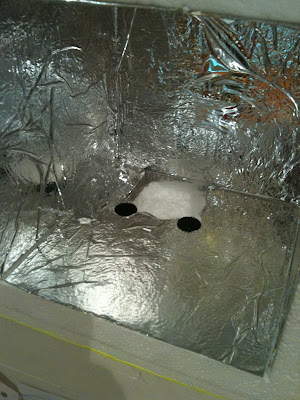