GAGA-1: Getting close to completion

January 22, 2011
The last time I updated on GAGA-1 it was when I cut the hole for the camera. Since then I've had a little time to work on it and things are getting close to completion. There's still a bunch of software to write for the flight computer, but that shouldn't take long. The launch will now be in the early spring when the winds are favourable.

First, here's a nice shot of where I was. It shows the interior of the capsule with the recovery computer mounted in place, a rough location for its battery pack and the camera. The two SMA connectors are for the GPS and the GSM antennas. 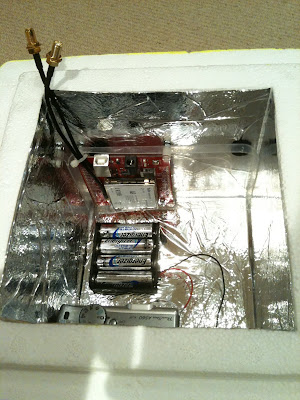 The first thing I did was make a couple of battery connectors with leads of the right length. I've bought two battery holders (one holds 4 AAs for the recovery computer, the other holds 6 AAs for the flight computer). Both have snap on connectors in the PP3 style and so I soldered up some short leads. 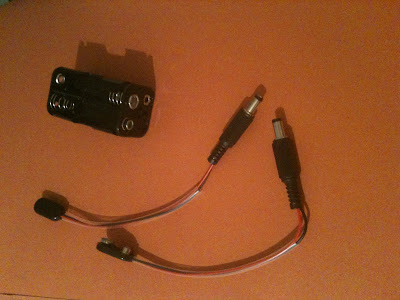 The next job was to shorten the leads on the GSM and GPS antennas. They came with leads 5m long and I needed to get them down to a few cms otherwise there would be excess weight from useless wire. I cut the leads and soldered on new SMA connectors. 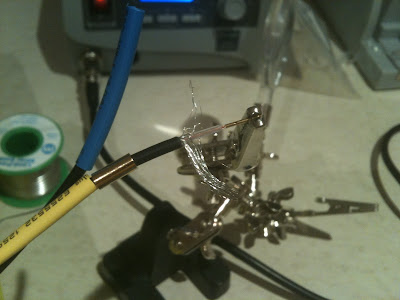 This was a total pain to do (any excess solder on the pin in the connector and inserting it was a nightmare). Finally, I got the three done with much poor language. Looks like there's some braid that needs trimming in this photograph: 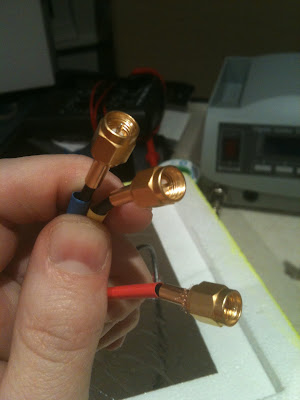 Next job was fitting in notice to the outside of the box in case it gets lost. This is a piece of paper that's been laminated and then hot glued to the outside (I've masked my phone number here but it is on the real box). Inside the box there's the same message printed on a small piece of paper just in case the outer one was lost somehow. 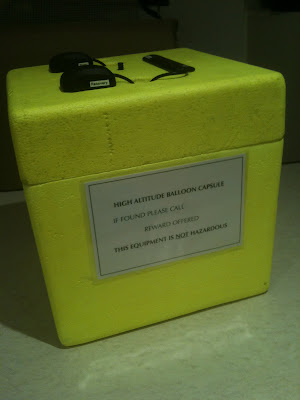 To reduce the impact of Murphy's Law I painted all the connectors with colours that match so that I don't do something stupid like connect the GPS to the GSM antenna or wire up the wrong battery. 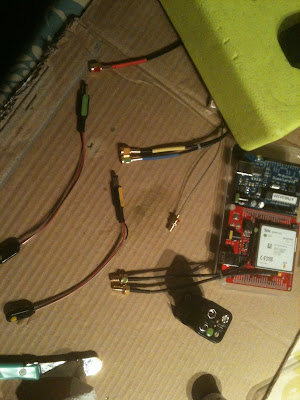 Then it was on to the flight computer radio. This consists of a Radiometrix NTX2 connected to the Arduino flight computer using a custom board. Here's the partially constructed board. It mounts on top of the Arduino and subsequently I've added a couple of resistors and an SMA socket. 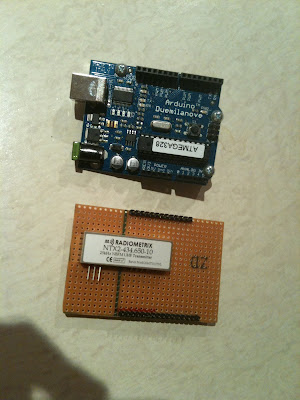 The radio, of course, needs an antenna and for this purpose I built my own 1/4 wave, ground plane antenna tuned to the frequency at which GAGA-1 will transmit. It consists of five pieces of cut up coat hanger. Each piece if 16.4cm long (1/4 of the wavelength of the GAGA-1 transmitter). 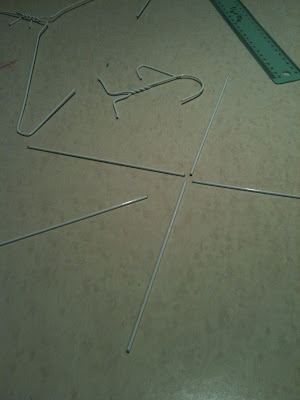 Finally, I painted and hot glued polystyrene balls to the ends of the antenna pieces to stop me (or others) getting poked by it. Here's a shot of GAGA-1 on its side with the antenna in place (the pieces are held together by a small round piece of plastic I found in my box of random stuff). 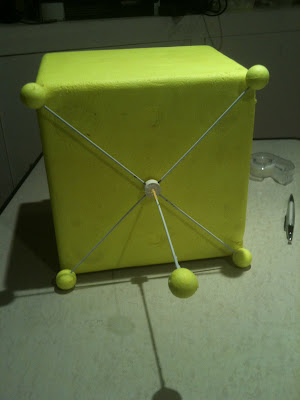 Some final tasks to perform are:

1. Fit the Lassen IQ GPS to the Arduino board
2. Write the flight computer software
3. Connect up the DS1821+ temperature sensors

Then I'll be ready for a full system test.

PS Having got all this stuff done I did a quick weigh in by shoving everything in the box (batteries and as yet unsoldered components). It weighed in at 989g. Pretty close to my original desire for 1kg.

PPS I will publish a schematic of the Arduino board when it's done.