February 28, 2011
Having got the flight computer radio working with my homebrew antenna it was time for a couple of tests: test that the radio could actually transmit over a reasonably long distance and see how long the flight computer would keep running for.

Here's GAGA-1 ready for its trip (I made a little cover for the antenna to protect it on the journey): 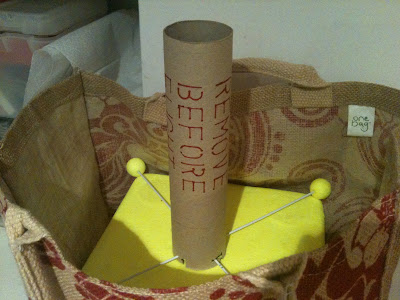 The capsule will get lifted to over 30km and I'm using a 10mW radio transmitter. As others have shown this works fine with line-of-sight and a good antenna. To run the test I got a helping hand from my parents who dropped me off at one end of Abberton reservoir with my Yaesu FT-790R and a Yagi antenna while they drove off to Abberton church with GAGA-1 sitting on the backseat transmitting a short RTTY message. The total distance between the two points was almost exactly 5.5km. Got a few funny looks from birdwatchers and families as I stood there (although one person was kind enough to take my picture, see below).

As they drove away I left the radio receiver on the ground with a little whip antenna on it. This was able to pick them up almost the entire way (at some points the signal fading, and while at the church there was a lot of noise).

Switching to the Yagi made the signal come in loud and clear, so loud and clear in fact that they never bothered to get out of the car. Over 5.5km from inside a car parked inside a copse the transmitter was working fine at the other end of this shot: 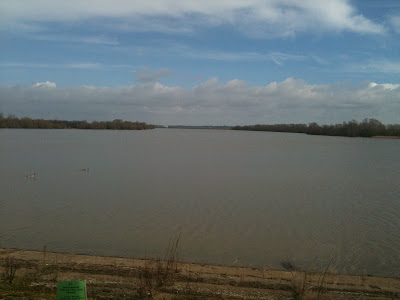 Here's an action shot of me with the Yagi pointing vaguely in GAGA-1's direction. The signal was so strong with the Yagi that pointing it in pretty much any direction worked. The final test for the day was to let the flight computer run and see how it fared. After 8 hours of continuous transmission I pulled the plug on the test. The final transmission was $$GAGA,24.8,Error: 0 which indicated that the internal capsule temperature was 24.8C and that the external sensor was not connected.

Here's a picture of the flight computer left and recovery computer on the right before mounting inside the box. 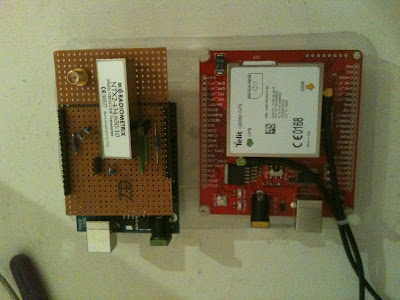 And here's a view inside the capsule showing the mounted computers with batteries. Doing this I discovered that I'd mounted the battery packs in positions that made inserting the camera really hard and no clearance for the antenna SMA connector. Had to remove and reglue. 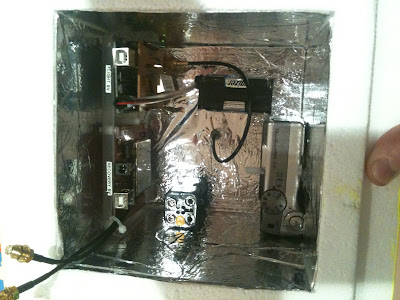