February 18, 2011
Yesterday's post contained a nice surprise: the parachute that will bring GAGA-1 safely back to ground level. It's a 36" parachute made to order by Spherachutes.

Spherachutes makes custom parachutes for model rocketry and also for high-altitude ballooning. Using their weight chart and an approximate weight of 1.1kg 2.4lb) for GAGA-1 a good size appeared to be 36". This should give a descent rate between 15 to 20 feet per second (that's rougly between and 16 and 20 kph).

Here's the parachute sitting on the kitchen table: 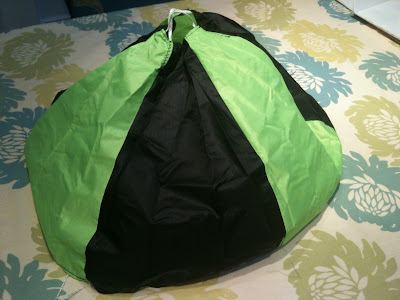 In the picture above you can see that there are two pieces of rope in the hole at the top of the canopy. That's the 'balloon option' provided by Spherachutes and is where the balloon itself will be attached via a few metres of strong, thin cord.

It's not possible to see the lines coming from the parachutes, but these will be attached to more thin cord which will attach to the capsule. So the parachute is deployed at all times. When going up the balloon pulls on the parachute. On the way down the balloon is gone and the parachute simply opens and slows the descent.

PS The folks at Spherachutes were great to deal with; highly recommended.