March 13, 2011
I'm calling the combination of balloon, parachute and capsule "the stack". Here's a diagram of how GAGA-1 will fly: 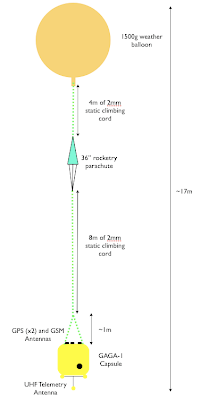 The balloon is attached to 2mm climbing cord which has a strength of 120 daN (decanewtons). That corresponds to roughly 120x the force of gravity on a 1kg mass. As the capsule has a mass of roughly 1kg there's plenty of safety margin (unless things get really hairy in the jet stream). 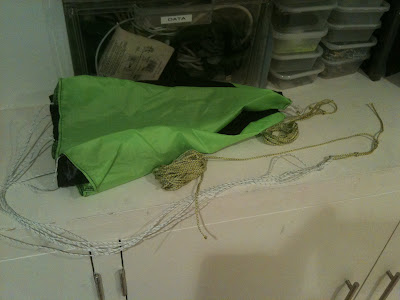 To keep the remnants hanging down on 4m of cord away from the capsule there are 8m of cord between the bottom of the parachute and the capsule attachment. You can see the cord bundles in the photograph above. They are attached to the parachute using double bowline with a stopper.

On the capsule there are cords that pass through the polystyrene itself (I pierced it with a long metal skewer and threaded the cord through). Here's a shot of the capsule hanging by its four cords. On the top are the two GPS antennas, the GSM backup antenna for the recovery computer, and the small black tube is the external temperature sensor sticking through. 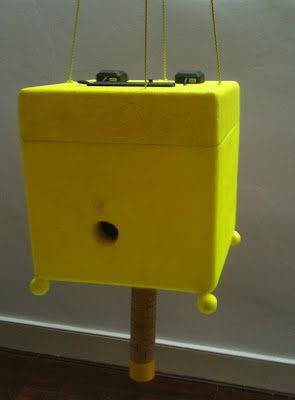 On the bottom you can make out the UHF antenna that will transmit telemetry to the ground (there's a cardboard cover protecting it which will be removed before flight).

Here's the underside showing the cord threaded through. 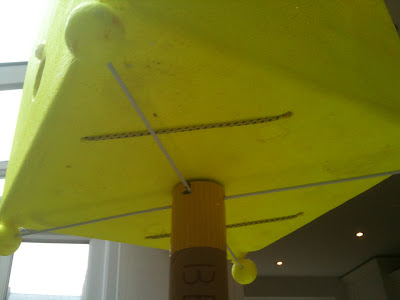 And here's the top where the cords come through both the capsule and its cover. 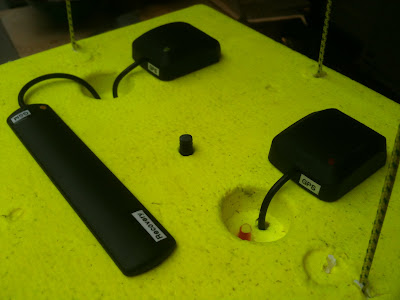