April 12, 2011
GAGA-1 flew on Sunday, April 10, 2011 and took more than 1,800 pictures of its adventure. The flight and recovery computers worked well right up until impact and the capsule landed safely in a field to the west of Cambridge.

Before giving details of the flight, I need to thank all the people who helped make it possible. Most importantly, Ed Moore of CUSF who helped on the day with balloon filling, expertise, a good place for coffee and a snack, and the chase. He was even the one that saw the little yellow square lying on the ground through a line of trees.

Also, very important were the radio amateurs and other enthusiasts who listened to the RTTY telemetry transmitted from the capsule and uploaded to the tracker. In particular G3VZV (and M0LEP) who followed the balloon almost to the ground enabled us to find it.

And lastly thanks to the denizens of #highaltitude for advice and encouragement, and who jumped in at the 11th hour and fixed some bad XML so that the tracker would accept the telemetry transmitted by GAGA-1.

GAGA-1 flew to 32,086m altitude and spent 2h12m in the air. The first telemetry in the air came at 09:48:54 UTC and the final telemetry was received at 12:01:09 UTC. The camera took 1,856 photographs including capturing the Thames estuary, the moon and the black sky. The complete photograph set (editing out tedious repetition) can be found here. Here's the first in flight photo showing Churchill College, Cambridge: 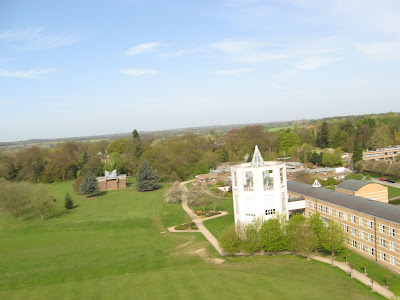 Here's the flight track. You can interact with it through this map. The blue markers indicate where SMS messages were sent. Two were sent on ascent (the recovery computer that sent them was programmed to go quiet at 2,000m) and one was sent close to the ground. 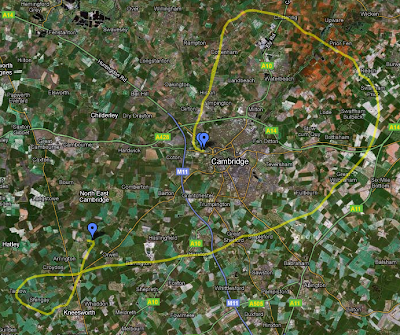 The final moments of the flight are here. The yellow marker shows the rough landing spot, the two blue markers show where the recovery computer sent SMS messages (the second one failed) and the yellow track is telemetry received. 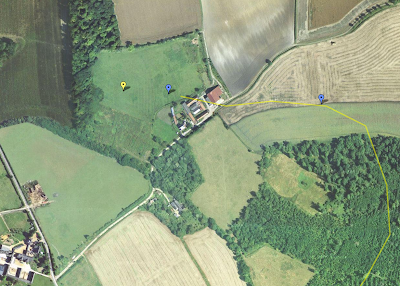 The ascent took 1h40m, the descent took 32m. The maximum descent rate was 77.93 m/s when the balloon burst (since the atmosphere is thin the parachute does nothing). The final descent rates was 8.2 m/s. 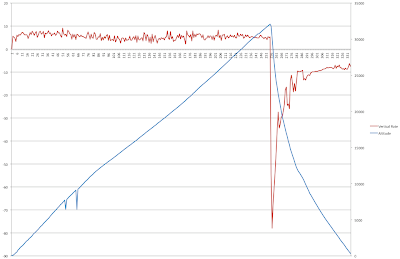 Here's a shot taken very high up looking down on the Thames estuary; to the bottom right there's a U bend in the river at Greenwich. The south coast is clearly visible. 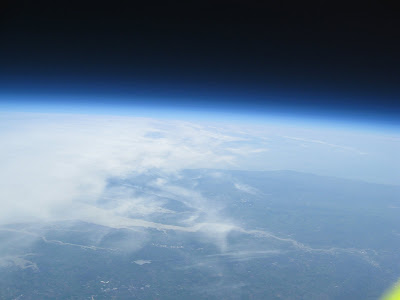 A later shot shows all of London with the Isle of Wight visible in the top right: 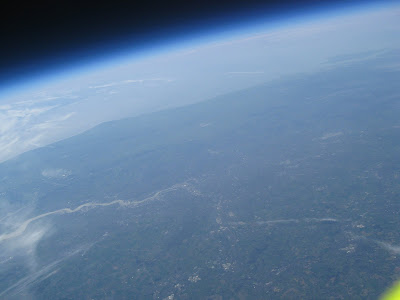 And just before the balloon burst GAGA-1 took this photograph of the Earth and space, the Isle of Wight and London and in the distance, France. 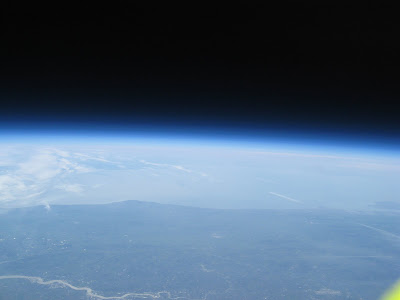 And more of space: 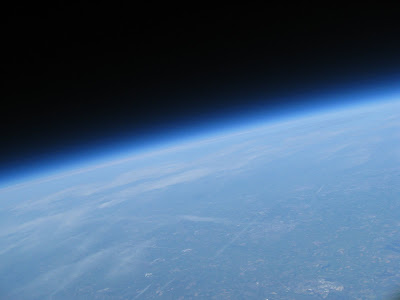 And here is a shot of our little satellite: 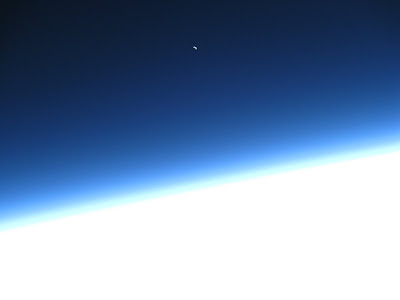 Things that did work

1. The flight computer worked flawlessly throughout and the signal from the 10mW transmitter was audible across the UK. It was picked up 542 km away in Northern Ireland and also in Scotland (as well as around England). A triumph for the coat hanger antenna and line-of-sight. Here's a video of the transmission being received in Northern Ireland:

2. The recovery computer followed a preset state machine. Initially it transmitted its location on early ascent, and then went into a quiet mode while above GSM access level. Once above the ballistic missile height the GPS shutdown and the built in program performed a cold reset. It successfully restarted and once below 4,000m started trying to SMS its position.

3. The camera worked and took many fantastic photographs.

4. Painting the capsule fluorescent yellow turned out to important as it was spotted on the ground from a few hundred meters and through a line of trees.

5. During the flight the recovery computer dealt with unexpected errors from the GSM module (indicating no access to the GSM network) and managed to carry on.

6. All my knots held and the rigging through the capsule walls worked. The UHF antenna was badly damaged on impact as expected. Unexpected was the fact that the capsule was upside down in the field meaning that the GPS antennas would likely have been completely shielded from the sky.

1. Both computers cut out on landing. Opening the box revealed that the two battery packs (that I had hot glued in place) had come loose, the six battery pack used for the flight computer had lost a battery when it hit the ground. The batteries were in place for the recovery computer, and it had power, but it had stopped operation. 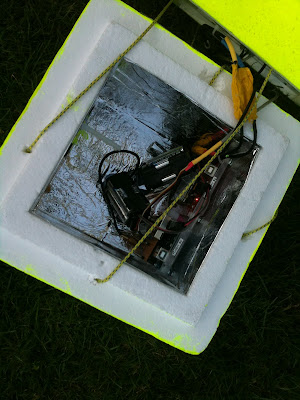 2. The balloon had not shredded cleanly. More than 1kg of balloon was still attached which helps explain the faster than expected descent. 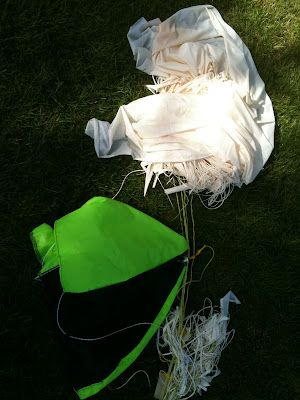 4. I couldn't access the tracker using my laptop in the car because O2 Internet Tethering was blocking maps.google.com for some reason. 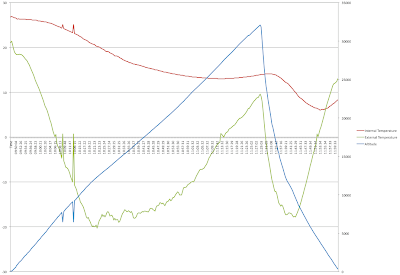 6. There are a couple of unexplained erroneous bits of telemetry corresponding to spikes in temperature and altitude at the same time (see the above chart).

7. On booting the camera it failed to turn on twice resulting in me changing the batteries and finding that it would only boot with the SD card missing. Putting the SD card back in would then work. I saw this twice.

2. The log kept by the recovery computer is here.

4. The source code used for the camera and both computers is here.

The camera has three temperature sensors in it covering the lens, the electronics and the battery compartment. Here's a graph showing its temperatures. Note that the front of the lens is exposed to the air with no protection. The heating at the end seems to be because the capsule sat around on the ground in full sunlight in a lovely afternoon while I searched for it. 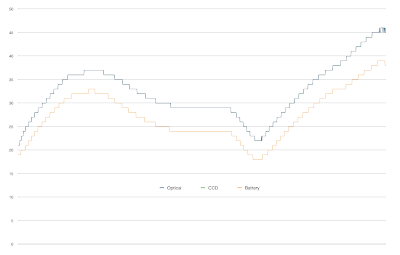 Here are two shots of GAGA-1 as we found it on the ground showing the balloon, parachute and capsule. Note a small number of balloon fragments are in the rigging of the parachute and a large amount is still attached to the main cord (it's not clear from the photographs but the cords were not tangled). 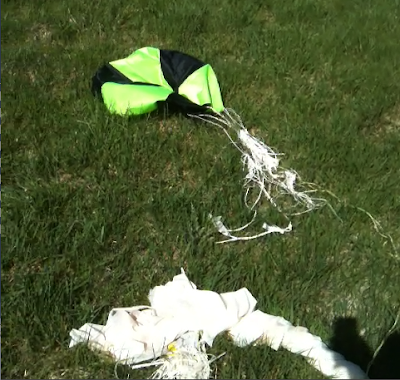 The capsule, upside down, baking in the sun and still taking pictures. A handy complete history of the GAGA-1 project from its inception in July, 2010 to the flight itself.

January 28, 2011: Calculating, rather than experimenting to find, resistor values for the NTX2 voltage divider

February 19, 2011: Working flight computer and The lovely sound of RTTY

My friend Eric Melski suggested while I was working on GAGA-1 that the appropriate soundtrack for the work would be Europe's The Final Countdown.

And so, for Eric and for everyone else, here are all 979 photographs taken during the flight set to epic Swedish 1980s synth rock.

MikeTheBee said…
I'm so pleased to see the great success of the the inaugural flight. I have followed the project with the listeners to my HomeCreative show and will be delighted to report this update.

I would like you consider licensing some of the pics under creativecommons as I am sure that others would love to use them in a creative mashup.

Best wishes for equal success with the Babbage project and your book sales.

John Graham-Cumming said…
I have changed the license on all the photographs to Attribution-NonCommercial-ShareAlike.
3:11 PM

Unknown said…
I can't believe you didn't include a link to the video version of the pictures: http://www.youtube.com/watch?v=_2CMgufZko8. The soundtrack transforms what is, honestly, a rather dull sequence of photographs into an experience of unparalleled awesomeness!

If I recall correctly your original goal was to get a picture showing the curvature of the earth. I saw a few that seem to qualify; do you have a particular favorite?
6:10 AM

John Graham-Cumming said…
I haven't had time to really look at all 979 pictures but I do like the ones with the moon in them.

I have added the Melski Mix to the blog post. I hadn't done it because I worked on it after the post itself.
9:38 AM

Kerry Liles said…
I too enjoyed following this project.

I came across this link to a similar project at a high school in the US:

Michel Jansen said…
The video at the end no longer works, because it has been taken down on some copyright grounds. So much for the final countdown :/
Do you have the video elsewhere? GAGA-1 is almost impossible to search for due to a similarly named lady ;)
10:06 AM