April 05, 2011
And so it came to pass that I made the final solder joint to the GAGA-1 flight computer a little before midnight and was able to do an integration test of it and the recovery computer inside the capsule.

Here's the completed Arduino shield that has the GPS (top left), temperature sensors and radio transmitter (bottom middle) that makes up the flight computer. The gold SMA connector at the bottom right connects to the external antenna for telemetry transmission. The three pin connector above the transmitter connects to the external temperature sensor. 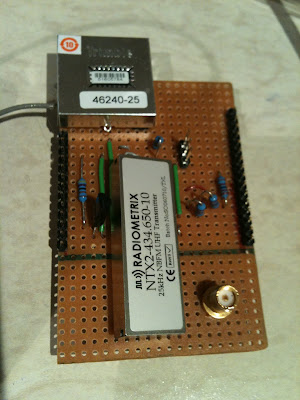 And here's a picture of the mounted flight and recovery computers ready for mounting inside the capsule. 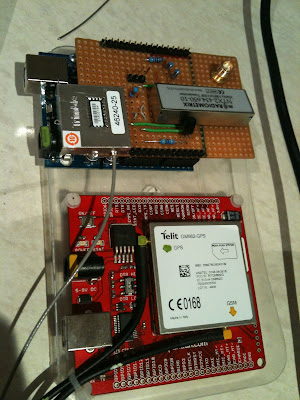 And so I duly placed it in the GAGA-1 capsule and powered everything up and... it didn't work. Which was a bummer, but this is why I do these tests.

The following problems were discovered:

1. The DTR switch on the recovery computer is flaky. Sometimes it doesn't stick and hence the computer doesn't start running. In the event this happens on the day it's possible to connect to the computer and issue an AT#EXECSCR command to force start up.

2. The RTTY telemetry was garbled. This was a surprise and seems to be caused by the GPS module's interrupts. Added a new interface to disable and enable interrupts during RTTY send and the RTTY seemed stable.

3. The flight computer GPS was happily getting a lock and the packets containing the lock were being received correctly, but no fix was being recognized. This is because of the way I was handling translation of floating point numbers. The Lassen IQ sends a 4 byte IEEE 754 single precision number byte-by-byte to the Arduino which must then convert this to an Arduino float (which is exactly the same format). The cast I was using wasn't working and it's been replaced by a union:
After that the recovery computer worked well and I received many SMS messages with the correct latitude and longitude of the middle of my back garden and an indication of the internal module temperature (around 15C).

The flight computer also worked, but it needs a second test before I'll be totally satisfied. I've yet to see a green bar on DL-FLDIGI indicating a successful decode of the GAGA-1 telemetry. This is essential for the tracker.

In other news the weather is still looking good for launch on Sunday. Here's the most recent prediction for 0900 UTC on April 10, 2011: 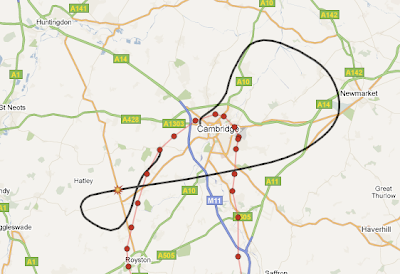 And GAGA-1 is getting a last minute addition. James Coxon asked if he could piggy back a Hellschreiber beacon on GAGA-1. So GAGA-1 will be flying with RTTY on 434.650 Mhz (the dial frequency I had last night was 434.652 Mhz) and Hellschreiber on 434.075 Mhz.