Experiments with polyurethane foam for injection molding a HAB capsule

June 27, 2011
Back when I worked on GAGA-1 I used a polystyrene container for the capsule. This worked well but it was quite large and polystyrene is annoying to cut.

So, I've been experimenting with expanding polyurethane foam to injection mold a HAB capsule.

My first experiment was to work with a big block of foam that I sprayed onto a sheet of baking parchment. The foam doesn't stick to the parchment and it can be easily peeled off. The set foam can be easily cut with both a saw (a bit messy since small parts break off) or with a Stanley knife. The Stanley knife gave clean cuts. It was also possible to hollow out a space inside the foam where the electronics could be stored.

One test I did was to see how strong the cured foam is by hitting it with a hammer. Here you can see the hollowed out capsule as I hit it with a geological hammer. It seemed strong enough to me for a HAB landing.

I then tested various glues and paints on the surface. Here I've painted it with spray paint (yellow) that is solvent based, again with the acrylic paint I used for the GAGA-1 capsule, then drawn on it with permanent markers, stuck on some yellow duct tape, glued on with spray adhesive some space blanket and used epoxy to stick some more space blanket in place. 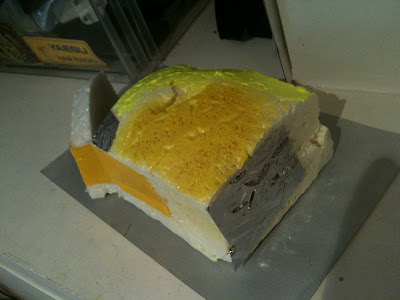 The solvent based paint did not attack the foam, but the coverage wasn't good and once again the acrylic paint put on with a brush gave the best yellow colour (at the top of the photograph). The epoxy glue stuck well and didn't damage the space blanket or foam (the spray glue didn't adhere well). The markers didn't damage the foam but the outside of the foam can't take much pressure from the marker tip.

The duct tape stuck well, but I wouldn't use it as the only means of keeping the capsule sealed. Next I left the capsule in the freezer (at -18C) overnight to see if the foam became brittle. 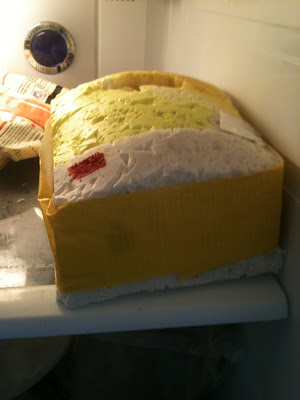 Didn't notice any ill effect from this temperature, but still need to do a proper test of the insulating properties.

Next I moved onto the injection molding experiment. I made a mold from a thin sheet of cardboard that came from a dry cleaner (used to hold folded shirts) coated with baking parchment. This was rolled up and taped and a piece of parchment used to seal one end. 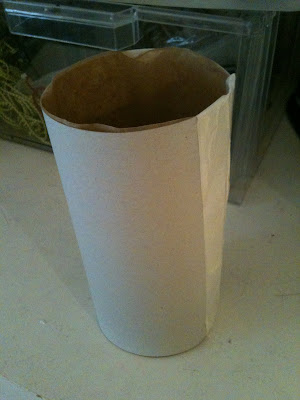 Then I made a small mold for the space where the electronics will go from an old business card holder covered in baking parchment and some tape. 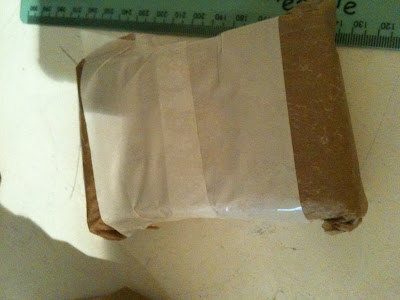 Then I suspended it inside the tube. This was a mistake because it really need to be suspended better because as the foam expanded later the box moved and I had to manually push it back into the appropriate position before the foam set (wear gloves!). 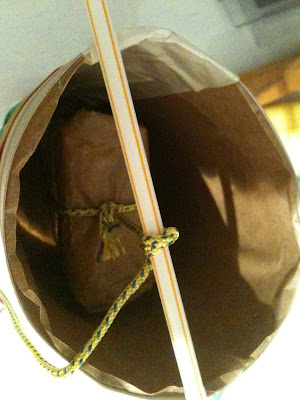 Then I sprayed the inside with water to help the reaction and sprayed in the foam from a can. After letting it set over night the mold looked like this: 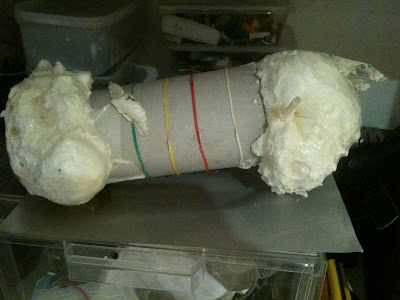 I cut off the bottom with the Stanley knife with ease to reveal a nice strong pattern of foam inside. 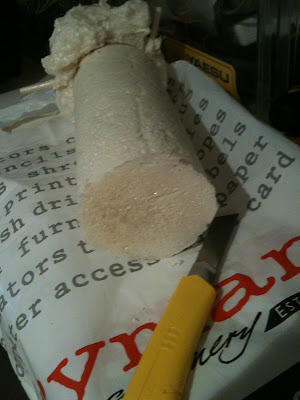 And the parchment was pretty easy to remove to reveal the capsule. 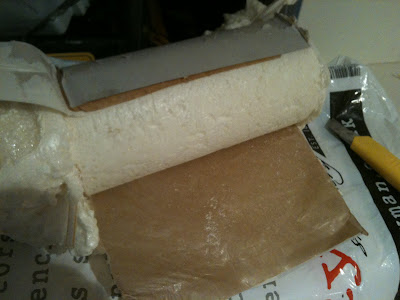 Here's the trimmed capsule when removed from the mold. 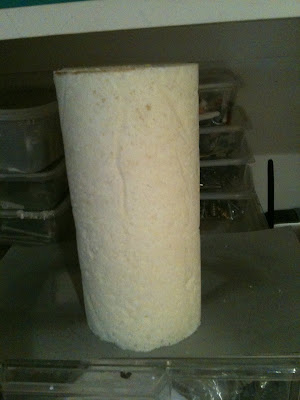 And a slice through revealed the mold inside. 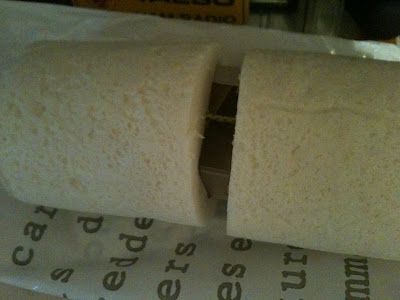 With a bit of pulling the bottom half was off revealing the internal mold. I had to cut through the cord to remove it and then pull the cord out completely. 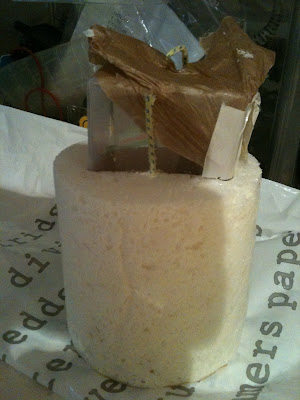 And finally the completed capsule in two parts. 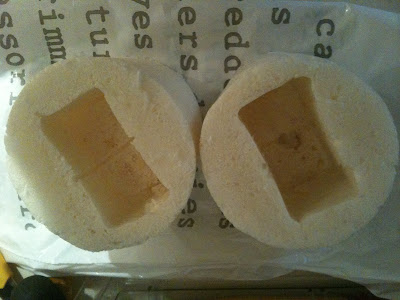 And shown next to the GAGA-1 capsule to show its size for comparison. 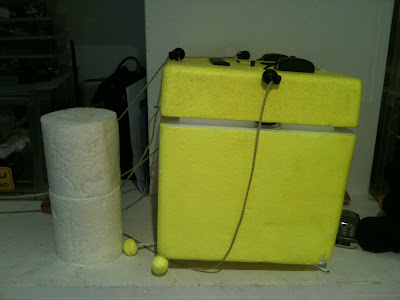 The GAGA-1 capsule weighed over 200g, this one weighs 25g. Switching from Arduino to Arduino Pro saves another 18g.

So, I think I could put together a HAB project whose goal would be to go for maximum altitude with a total capsule weight in the 100s of grams (including a very lightweight video camera this time).

Will have to see if I have time to work on GAGA-2: Baby Gaga.

Edward said…
John,
The expansion of the urethane foam will vary based on temperature. The warmer the foam and the air, the greater the expansion. This might save a few more grams :-)

Paolo Campanella said…
That foam-in-a-can stuff is very weak. For a better alternative (light, and so hard you can barely pierce it with your finger nail) see: http://www.smooth-on.com/Foam-iT!=Serie/c1122/index.html