How The Zodiac enciphered the Zodiac 408 cipher

June 14, 2011
I was looking through the Zodiac Killer ciphers the other day and woke in the middle of the night wondering how The Zodiac actually enciphered the first message (the one that was decoded).

I started to wonder how when The Zodiac was writing out the message he picked which symbol to use. And it occurred to me that he might have used a really simple system: cycling through the symbols for each letter in the same order.

A quick look at the cipher showed that it was likely that the simple scheme was used. Here I looked at the letter E and the letter N and discovered that a simple pattern was used for each. 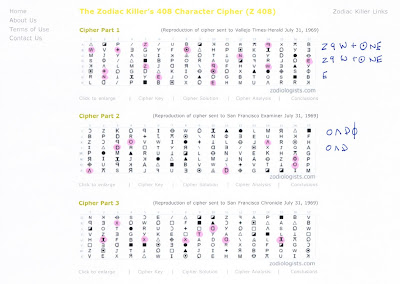 Using a small program I wrote I identified the sequence used by The Zodiac for all the repeated letters (note that I've used lowercase letters for the reversed or upside-down capitals used by The Zodiac):
(In the above table * is The Zodiac's character that looks like pi with curved legs). The Zodiac mostly kept to this scheme with occasional errors (either deliberate or unintentional).

This leads to a possible way to attack the unsolved Zodiac 340 cipher. If The Zodiac used a similar scheme where he repeated the same sequence over and again for each letter it should be possible to find those sequences and reduce the decryption to something close to a classic substitution cipher.

An attack would consist of the following:

1. Split the Zodiac 340 cipher on each of the symbols to obtain a list of lists of sequences

2. Remove any duplicated characters from the lists (since we can assume that there will be none if the characters are being used in order as in the Zodiac 408)

3. Generate all combinations of the first list and look for the same subsequence occurring in the other lists.

Looking at the Zodiac 340 it looks like it splits on average into deduplicated strings of between 20 and 30 symbols. If we look for subsequences of length say 6 then each search would require 38,760 and 593,775 combinations to be generated. For 63 characters that sets an upper bound of roughly 37m combinations. That leads me to think that this approach could be used.

Dave O said…
Nice post! If you are interested, here is some other info about homophone sequences in the Zodiac ciphers:

I tested for the presence of quadrant-based layouts in the 340 by measuring the quality of homophone sequences in millions of transformed versions of the 340:

Finally, I have a brute-force homophone search in the CryptoScope: http://oranchak.com/zodiac/webtoy/stats.html

Scroll down to "Brute force search for sequential homophones". More detail about this can be read here: http://wiki.zodiac-ciphers.dreamhosters.com/wiki/CipherScope_Help#Discovering_sequential_homophones

John Graham-Cumming said…
Ah. Fascinating. I guess I stumbled across a technique others had also found. No real surprise there.

Is there a non-$ version of the actual paper available?
9:51 AM

TravisD. said…
Hi,I've actually been researching and studying the Zodiac for not too long now and when I saw the Halloween card and envolope,it triggered a little something in My head.I believe the Zodiac changed His cipher to trip people up.I believe He is using sequences of different languge alphabets from different times and countries.

I started doing more research on Roman,Greek,Phoenician,Babylos...Ect.And all the symbols are there,including the one from the Card,except I believe it to be two symbols put into one.I just see too many similarities between them all and I'm not dismissing it.I thought I would just speak what I had to say,thank You.Travis.
9:50 PM

TravisD. said…
Believing to be the most intelligent killer of our time and so tricky to throw the authorities and public,even the FBI off.Was He really writing this last cipher in His own code?I've studied and observed ancient and current languges of Roman,Greek,Phoenician,Etrusian and Safaite.Many writing at that time basically had some same symbols that matched each language.We know Zodiac was more intelligent than anyone took Him for.What if He wrot His last cipher out of multple symbols from these languges?Google sear "Zodiac Alphebet" and belo on the page You'll see images,check them out.It's quite surprising and curious,but it's just a theory.
12:20 AM

TravisD. said…
Like I had mentioned on another forum,I was curious if The Zodiac,when He was always talking about taking His slaves to paradice "paradise",could He have been talking about Paradise,CA,which is only about 144 miles NE of Vallejo.Could the Zodiac live or have lived there?
3:21 AM

Dave O said…
The ciphers wiki has moved, so here are the corrected links from my previous comments:

olejeek said…
I think some of the Zodiac characters look like the alternative keys on on older keyboards (printed beside the normal alphabet) like the the Commodore64 schematic PETSCII
(http://en.wikipedia.org/wiki/PETSCII), although this was released in the 80's there may be some older typewriters or "computers" from the 60's that can have the same alternative characters.
Just had a thought that the Zodiac can have used some current 60's keyboard-layout to "decrypt" his messages, just have to find out if something like this existed back then.
I mean if no one ever found out his encrypt/decrypting method, who knows..
3:45 PM

Unknown said…
This comment has been removed by the author.
1:06 PM

Unknown said…
has anyone noticed that the errors in the solved cipher spell "rich"?
9:06 AM

pussycat said…
I mean why bother giving the zodiac satisfaction of even trying to decipher his code.
He is not worth it.
Plus he's probably dead
10:43 AM