Back from the dead with a power supply repair: my BBC Micro Model B

November 13, 2011
A couple of weeks ago I plugged in my BBC Micro Model B and it went up in a plume of smoke.

Unfortunately, the 30 year old machine had undergone one of the most common failures. A capacitor that had been sitting there all these years failed, burst open, emitted smoke and leaked all over the circuit board.

Today, I repaired the damage. This blog post is for anyone who faces the same thing.

To fix the damage I replaced three capacitors that are likely to die over time (including the one that had burst) using a kit costing £2.70 from this site and a copy of the BBC Microcomputer Service Manual. 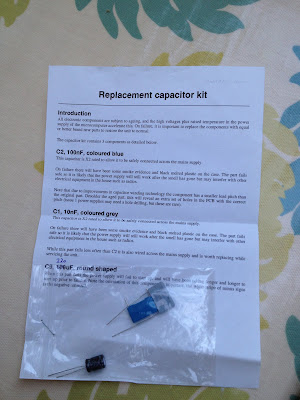 The kit has one electrolytic capacitor (which is polarized and has to be inserted the right way round) and two ordinary capacitors which can be inserted in any way. The three capacitors to be changed are marked C1, C2 and C9 on the circuit board. On my machine it was C2 that had failed.

The first step is to remove the power supply from its case. This is carefully described in the service manual (including two cable ties that need to be cut and replaced). Here's the supply without its case. I've marked the three capacitors to be replaced. 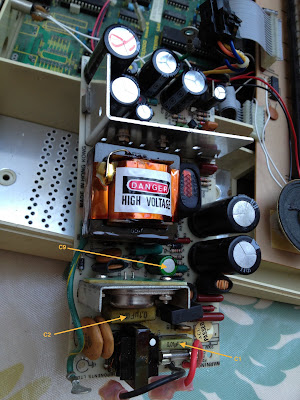 And here's the reverse of the circuit board (clearly hand soldered) and I've marked the six joints that have to be desoldered. I used my normal soldering iron and a solder sucker to remove all three capacitors. 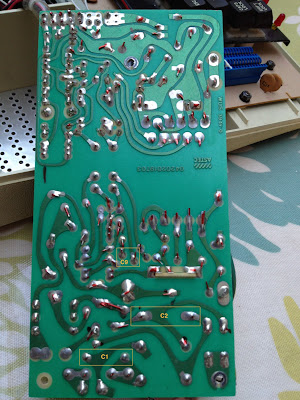 And here's a shot of the three capacitors after they've been removed with a close up of the ruptured C2. 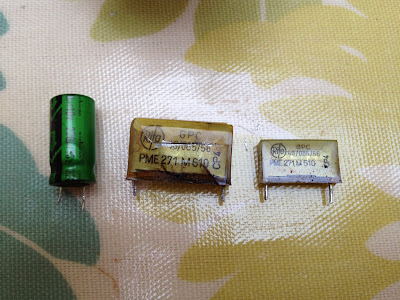 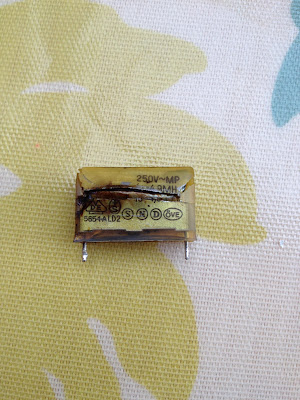 With the capacitors removed you can see the capacitor juice that had leaked onto the PCB. I cleaned it off with some alcohol and Q-tips. You can also see that C2 actually had four holes drilled for it. Two were used for the supplied capacitor and the other two are used in the repair as the new capacitor has leads that are slightly closer together (good of Acorn to plan 30 years ahead!). 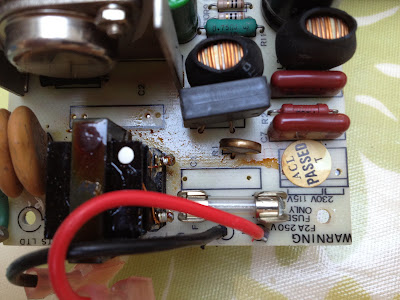 Soldering the three in is not hard (make sure the electrolytic is the right way round). Here's my finished circuit board: 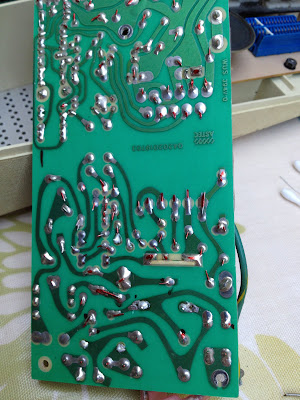 And the reverse side showing the three new capacitors in place: 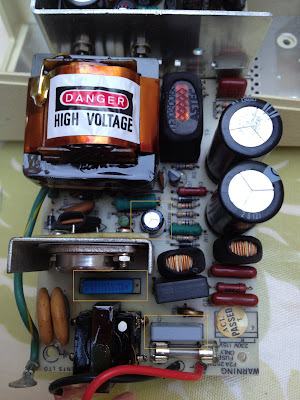 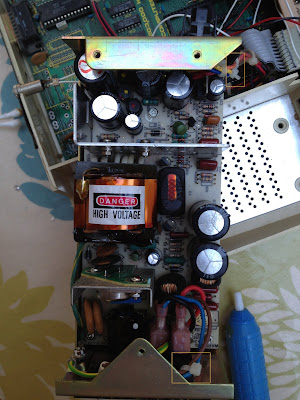 And putting it all back inside the case... it works!

Glen Mackie said…
I've also just had this happen to me. But for some reason, the power switch seems to be reversed on my machine. i.e. 'On' turns the machine off and 'Off' turns it on. Do you have any idea why this might be?
9:26 AM

Phil B said…
Hi Glen Mackie,
If the power is inverted it means the switch is in upside down (most likely replaced earlier in its life).
If the switch is a single pole then turn pull off the spade terminals and turn the switch upside down.
If its double pole then simply remove one of the AC leads and fit to its opposing end (if that makes sense!)

Unknown said…
It is quite difficult to fix broken power supply. My friend did it a few times but I failed. Have you ever tried to fix Dell PSU? Like this model for example http://hardware.nl/dell/2h35j.html? It would be interesting for me to know it.
1:43 PM