November 16, 2011
So you've got a DVD stuck in the external USB SuperDrive that connects to the MacBook Air? And you've tried hitting the magic Eject button on the keyboard to no avail?

What do you do?

Clearly you hit the physical eject button, right? Every DVD drive has one of those. On the SuperDrive you first look for it on the front:

Hmm. Nothing there. Perhaps it's one of those pinhole things on the back.

Or on one side:

Or, heart in hand, the other side:

I know, I know. Jonny Ive hid it on the bottom out of sight, right? It's so obvious now. Put a pinhole on the bottom where it will only be seen when needed. Form and functionality in one. Sleek lines when in use. An accessible emergency button when needed. Genius. 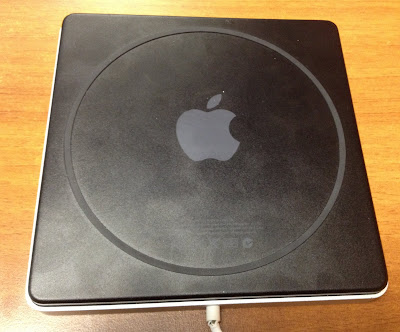 Nope. But, phew, at least there's an Apple logo there. I was beginning to worry.

So, the easy procedure for removing the disk is as follows. First you pry open the case with some thin available tool: 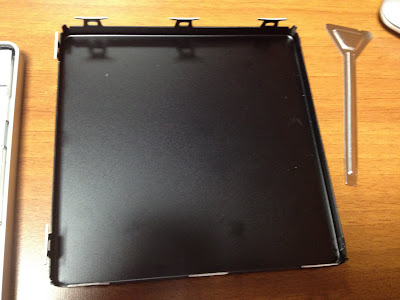 Then you remove the six screws holding the drive into the case: 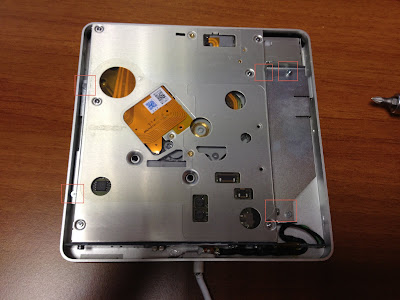 Then you turn the drive over in anticipation of seeing your DVD only to be thwarted by another cover and a set of screws: 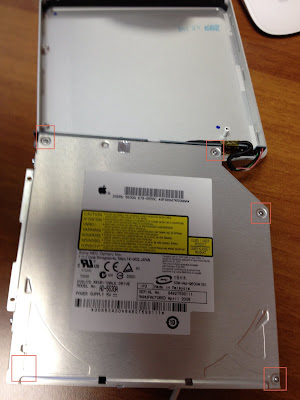 And then, finally, you peel back the cover to see your DVD and remove it. 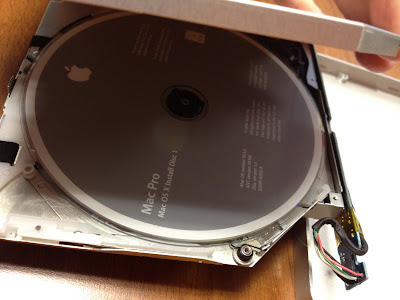 Once reassembled the drive complains about the missing disk and promptly goes back to working normally.

And then you wonder to yourself. The drive inside the case is a Sony NEC Optiarc AD-5630A. And every other drive that Sony sells has a physical eject button, even the slot loading ones. Did Apple hide it? Did they ask Sony to not provide a button? I'm guessing that the Cypress Semiconductor microcontroller inside there knows all about doing an emergency eject.

Of course, you stop worrying about that and wonder how the cable has managed to fray on this barely used drive: 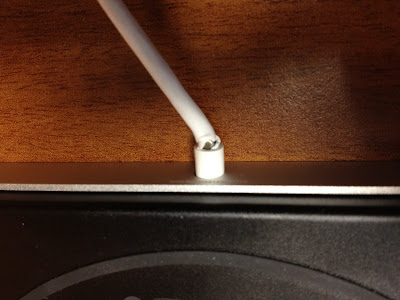 PS Some people have pointed out that there may be a secret lever inside the drive accessible from the front by sticking a thin screwdriver inside. I can't find any reliable mechanism (although jamming the DVD in place using a wad of paper and rebooting does work).

Morgan said…
I'm assuming the first thing you did was hold down the mouse button on launch, right?
5:43 AM

John Graham-Cumming said…
Yes, I had tried that also.
9:53 AM

Mijonles said…
I didn't find the guide instructions until this morning, but I did read the comment regarding the frayed cable, which is exactly like mine. I figured the frayed cable might have something to do with the inability to eject, so I pinched the cable at the fraying spot and shoved it closer into the drive. Guess what? That was enough to get the stuck disc to eject. Glad I didn't have to go through the dismantle process!
5:29 PM

Mijonles said…
Didn't notice the instructions until this morning, but I did read the comment on the frayed cable, which looks just like mine. I thought that might have had something to do with the eject problem so I pinched the cable at the frayed spot and pushed it closer to the drive. Voila! The disc popped out as soon as I hit the eject key once more. You have to pinch with one hand and grab with the other or the disc might wind up going back inside the drive.
5:32 PM

ManlyDel said…
Thankyou!!!! Plugged the drive into my Dell laptop, it loaded software and then popped out straight away without prompting.

Love my Mac but little bit strange when the USB Superdrive behaves better on my windows than the Mac is was designed for.
4:35 AM

Zuhaib said…
If it's a DVD video, you can just go to the DVD player on your mac and click "controls" in the top menu bar then "Eject DVD" or command+E.

If it's not, look for it in the finder under "devices". there should be an eject button next to it's name.
4:16 PM

Unknown said…
Zuhaib you're a genius! thanks for the help
9:59 PM

Jorge Rawlings said…
My problem is that Finder doesn't even recognise that it's plugged in. I'm not bothered about the disc; it was Green Day's "UNO" which was frankly disappointing. I'm more worried about the ridiculously Apple-like amount of money I spent on something which should already be built in to a laptop.
10:31 AM

Jorge Rawlings said…
My problem is that Finder doesn't even recognise that it's plugged in. I'm not bothered about the disc; it was Green Day's "UNO" which was frankly disappointing. I'm more worried about the ridiculously Apple-like amount of money I spent on something which should already be built in to a laptop.
10:31 AM

Unknown said…
Nice blog, "the genius helpers from apple.. not that genius. rsrs
thanks
8:27 PM

Michael Peck said…
ManlyDel mentioned the Dell laptop ...
I started my XP virtual machine on the MacBook Pro
Plugged in the drive
Parallels sees the USB device and asks if I want it on Mac or XP ... select XP
The Drive shows up ... I select eject ... out it pops!

All of this on the same machine - OS X has some software problem!!
7:33 PM

Unknown said…
i cannot believe it... i hooked it up to my old pc that i keep for testing. right click and eject and that did. just popped out like the old days.

a very sad day for apple. how could they? i mean a frigging pinhole to eject - and put that paperclip to use. i am beginning to wonder why i have changed over all 12 computers!

oh, yeah - no blue screens and everything syncs without thinking
8:05 PM

eipi said…
Thanks for these instructions. They worked perfectly. I found it easier at the last step to remove only three screws and remove the stuck disc with a pair of fine tweezers.
4:45 AM

Unknown said…
I used some very thin long-nosed needle-nosed pliers, pulling on the disc whilst hitting the eject key combination. Gentle persuasion......
4:37 AM

Unknown said…
i've plugged mine into several laptops trying to eject the disk and it says "no media available" is there anyway i can get the disk out without pulling the dvd drive apart?
12:42 AM

Unknown said…
Hey all,
DON'T HEED this advice unless you have an old external CD/DVD drive-I just took my new (2014) Mac one apart and it is not the same under the hood as the diagrams here-the process to remove the disc was impossible.
All the best,
k
3:57 PM

Unknown said…
OKAY, I LITERALLY JUST HAD THE SAME PROBLEM!!! So, i got really annoyed because none of these comments were helping, so heres some things that i did to eject my CD! i hit the drive multiple times, pushed the wire into it, and grabbed the sides and shook it. Not sure f this will work for you, but i was so excited when it finally came out!!!:) like 5 minutes ago...
3:53 AM

Unknown said…
THIS IS SO SIMPLE PEOPLE . WHEN YOU INSERT A DISC YOU WILL SEE AN ICON FOR THE DISC YOU WANT TO PLAY AND IT WILL APPEAR ON YOUR DESK TOP. TAKE THAT ICON AND DRAG IT TO THE TRASH AND YOUR DISC WILL EJECT .... EVERYTIME
9:04 PM

Unknown said…
To EJECT a DVD or disc from a Mac Book air when you are using a USB superdrive is SIMPLE. Drag the icon for the disc that has appeared on your desk top when you tried to play the disc, into the trash and the dvd will EJECT .... works everytime
9:06 PM

Unknown said…
I just had to do this for a co-worker. We tried dragging to trash, holding down eject button, command line, etc.

I turned the SuperDrive over, restarted the machine & held down the Function key and the F12. Disc came out!
12:00 AM

ABDULRAHEEM said…
Good info. Thanks for following up and posting back.
Thanks for sharing the details!
i would like to more information from your side!
please added more then tips!Am working in
used laptops in hyderabad
5:43 AM

Tracy said…
My MACbook pro doesn't recognize the the dvd/cd drive because my cat chewed the wire. or I get a message the USB drive disabled from using too much power. So I can't use eject or drag to trash

Tracy said…
My MACbook pro doesn't recognize the the dvd/cd drive because my cat chewed the wire. or I get a message the USB drive disabled from using too much power. So I can't use eject or drag to trash