The Lack of Affordance Problem

November 17, 2011
Yesterday, I complained about the lack of an eject button on an Apple USB DVD drive. That design philosophy problem goes much deeper than just a single drive. It pervades Apple products, and, although I love them, it drives me spare!

If I could say one thing to Jonny Ive it would be: "In designing to make the every day use of Apple's products a wonderful experience you're missing the moment when your users need you most. It's when everything goes wrong that the user needs the maximum help. It's in those moments (of despair) that a well designed product will surprise and delight the user."

The DVD drive is an example of the opposite. When it's working it's lovely to look at, but when it goes wrong it's as enigmatic as the 2001 monolith.

The mystical incantations necessary to remove the DVD from the drive (such as the hold down the mouse button while rebooting your machine) have to be passed on from the Apple elders in secret whispers (or found by a desperate Google search). Surely, there's a better way? The DVD drive could have had a discreet eject button. And Apple software could be better.

Take the MacBook Air. If it's gone wrong and I need help I'm going to need the serial number. How do I get it? There are (at least) two ways. First it's printed on the bottom of the machine in tiny type printed in almost the same colour as the case. It's as if the designer wanted to make it hard to read. For goodness sake it's on the bottom of the machine, it wouldn't have killed you to use bigger type, or a different colour.

The second way is in software. But knowing that requires more mystical knowledge and reveals something truly nasty. Here's the dialog you get by clicking Apple -> About This Mac. 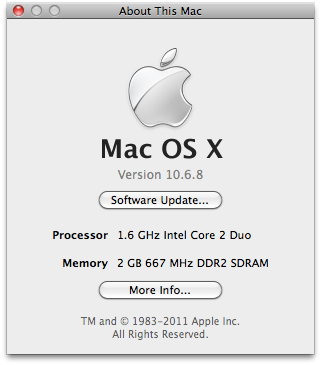 If you click on the grey text that says Version 10.6.8 the text changes, first to the build number and then to the serial number. There's is no indication that this will happen. The cursor doesn't change, it's normal text that the user wouldn't expect to see change like this. (You can also click More Info... to get the System Profiler where you can find the same information).

Why do this Apple? Why not let me know this is clickable? What's needed is an affordance. Something that lets the user know that this is interactive, that leads the user to the right action.

This situation gets worse with touch screens. Because there's no 'hover' possibility you are left guessing which inscrutable user interface element might be interactive, or what gestures are possible.

I swear that one day the iPhone will do something interesting if you take the Tai Chi "Carry Tiger to Mountain" position.

And don't even get me started on the abomination that is the Apple keyboard USB extension cable fiasco which is a USB cable with a special little indentation in the USB plug so you can't use it for anything else. That just feels like that designers sat around laughing at the purchaser. 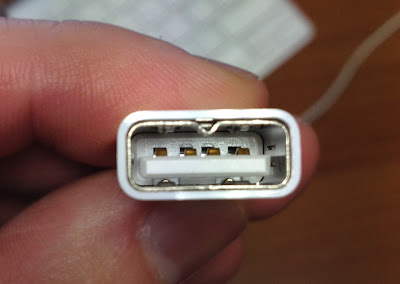 And then there's the problem of video connectors.

PS A commentator on Hacker News pointed out that the USB specification prohibits extension cables and so although millions of the things exist, Apple probably did the right thing by making the extension a non-USB cable.

John Graham-Cumming said…
You are correct. I will fix that.
11:15 AM

Ruben Berenguel said…
They could get by with a discreet button, like the "battery meter" in (I think) older MacBooks, like mine (side by side to the battery, press it and 5 leds will indicate the power remaining in the battery).

outer_space said…
The reason for the usb extension connector is that there is a spec for maximum usb cord length. The apple keyboard cord is very short, the extension only makes it normal size. If you extend a normal size usb cord even longer, it won't work properly, and apple is preventing that with the special connector.
11:53 AM

John Graham-Cumming said…
I find that explanation hard to believe. According to USB.org:

Q1: How long of a cable can I use to connect my device?
A1: In practice, the USB specification limits the length of a cable between full speed devices to 5 meters (a little under 16 feet 5 inches). For a low speed device the limit is 3 meters (9 feet 10 inches).

The Apple keyboard cable itself is 90 cm long, the extension is a meter. Thus it is well within the limits of the cable and I should be able to add an extension cord (say one of 2m) without a problem.
12:29 PM

max said…
"The USB 1.0 spec does not allow for an extension cable for USB devices. Extension cables refer to any cable built with a series A socket or a series B socket at one end."

Apple are making this a non standard socket so they aren't violating the USB spec.
1:48 PM

COSTANZA!!! said…
"I swear that one day the iPhone will do something interesting if you take the Tai Chi "Carry Tiger to Mountain" position."

ctdonath said…
"The Apple keyboard cable itself is 90 cm long, the extension is a meter. Thus it is well within the limits of the cable and I should be able to add an extension cord (say one of 2m) without a problem."

But without the tab you could collect a few such Apple extension cables, stick them together, and go well beyond the 3m limit - then get mad at Apple and blog that "it doesn't work!"

By putting that tab there, you are limited to staying within the USB electrical specification.
7:50 PM

b said…
Just a quick note... if you click "about this mac" you should see your serial number. The clicking on the version is just a convenience, I think.

Not arguing that it's harder than it needs to be but it's there if you need it.
7:37 PM