My BBC Micro Model B and a plume of acrid smoke

November 01, 2011
So, after yesterday's post about The Demon Machine I decided it would be fun to play around with the BBC Micro Model B and so I plugged it in and powered up. The familiar two-tone boot sound played and the machine was on.

About 15 minutes after power up there was a fizzing, popping sound from the computer and I ran to cut the power. Too late! A plume of blue/grey acrid smoke poured out of the left hand side of the machine right by the power supply.

I cut the power and moved the machine away from anything that might burn quickly and waited for the smoke to stop. It quickly dispersed and so I did the only thing a self respecting software engineer would do... I decided to turn it back on again.

But not without opening the power supply so I could take a look inside while it was running. Here's the PSU open after the fire: 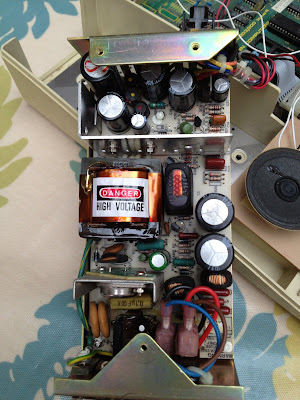 Warning. I don't recommend that you do this sort of thing yourself. There are high voltages there, plus a bunch of electrolytic capacitors that can do nasty things if they feel like it. I was doing this while wearing my safety glasses.

You'll notice that there doesn't seem to be anything burnt in the supply and when I powered on the machine worked perfectly. Close examination shows that one of the capacitors used for power supply filtering had cracked open and burnt up. 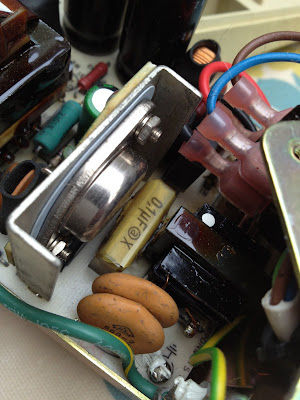 If you look carefully you can see the cracking on the case of the capacitor and fresh capacitor juice running across the circuit board (most visible on the top photograph). A quick Google tells me that this is one of the most common failures on the BBC Micro power supply and easily repaired.

It's interesting to note that the capacitor used is rated by safety agencies because of the potential for failure leading to a short at mains potential and the metallized film is designed to self heal or fail safely. The device is also meant to fail safely at a peak potential of 2.5kV without burning with a flame.

The capacitor under test is connected to rated voltage through a transformer and filter. 20 transients are then introduced across the capacitor at random intervals while rated voltage remains applied. The amplitude of the transient is dependent on the class of capacitor. The capacitor may not flame during this test.


Not often you get to see an international safety standard take effect. 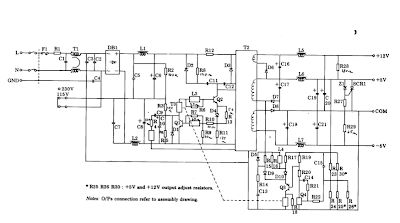 The dead capacitor is C1 which sits right across the mains power input. Looks like I'll be getting the soldering iron out once the replacement part arrives.

Anonymous said…
That's a pretty common failure mode of electrolytic capacitors that have been unused for a long period of time.

One solution is to slowly increase the voltage on them over a period of time, to let them reform.
2:54 PM

James said…
That exact same thing has just happened to me! The room stinks of dead electronics now.

James said…
That exact same thing has just happened to me! The room stinks of dead electronics now.

Unknown said…
Hi there I decided to take out my bbc micro b a friend gave to me. And exactly the same thing as happened to mine. I heard this crack, pop and fizzle couldn't for the life of me think what it was. Something told me it might be the computer so I felt it and it was quiet warm. Suddenly I could smell this acrid smell and I saw smokke was rising up from the same spot as you mentioned. So I unplugged everything and it now sits in it's polystyrene tray never to be used again.
12:57 AM