January 06, 2012
Last April I sent a weather balloon up into the stratosphere after months of preparation. You can read all the details starting here. I called the flight GAGA-1. Well, it's time for a GAGA-2.

Since last April I've done a number of experiments with expanding foam to see if it would make a viable material for the GAGA-2 capsule. Summary: no. It's too hard to work with, it doesn't insulate that well and I can get a cheap polystyrene capsule that's much smaller than the GAGA-1 capsule.

So, GAGA-2 will aim for a spring time 2012 flight with a number of changes from GAGA-1. First, a much smaller, lighter capsule. Second, video cameras rather than still. Third, no backup GSM based tracker.

Here's the new capsule. It's made from a pair of hollow polystyrene spheres that fit one inside the other. 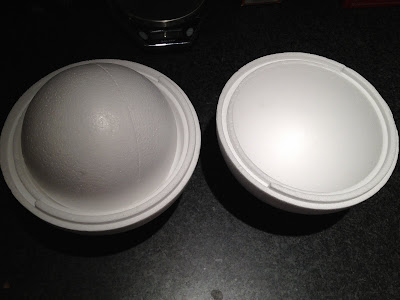 These are very, very light. Weighing in at a total of 68g (compare that to GAGA-1's capsule that weighed more than 200g). 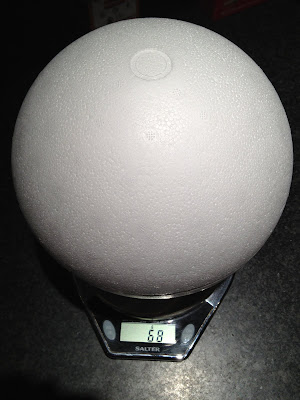 The inner sphere is covered in the same mylar film that was inside GAGA-1, and the outside is painted the same fluorescent yellow covered that proved so successful when recovering GAGA-1 (it was visible over 400m away through trees). 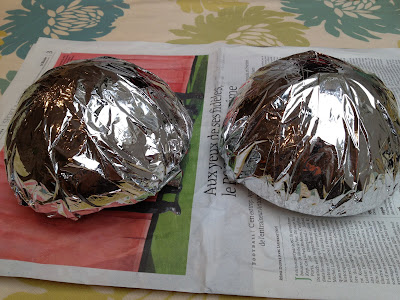 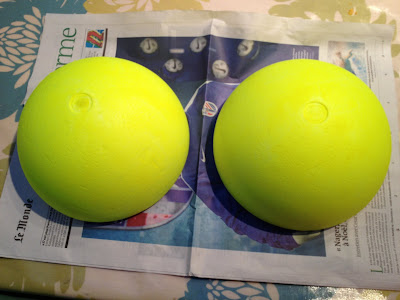 For comparison here's the GAGA-1 flown capsule next to the newly painted GAGA-2 capsule. 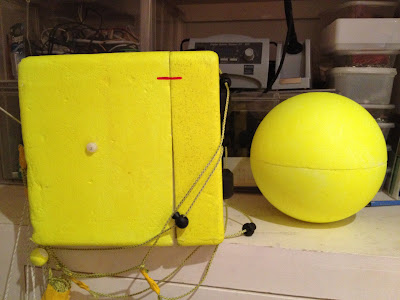 GAGA-2 will use the same parachute (GAGA-1 was actually a bit heavy for the size and the descent should be a little more graceful this time) and rigging as GAGA-1. 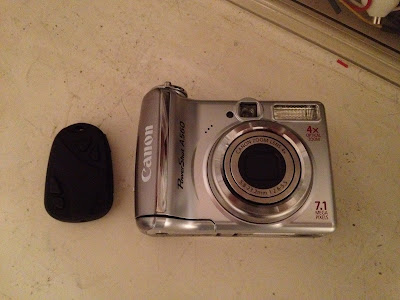 New UKHAS guidelines aimed at improved safety ask that "Antenna elements that face down should be flexible - avoid metal rods." GAGA-1's antenna was pretty stiff having been made out of a cut up coat hanger. So in keeping with the guidelines I've made a new antenna of the same 1/4 wave design out of Ikea drinking straws and copper wire salvaged from this project. 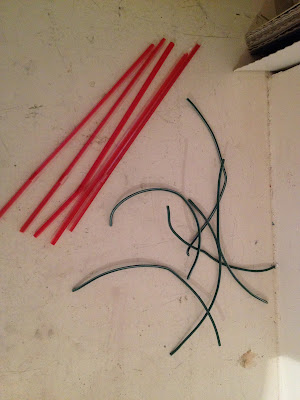 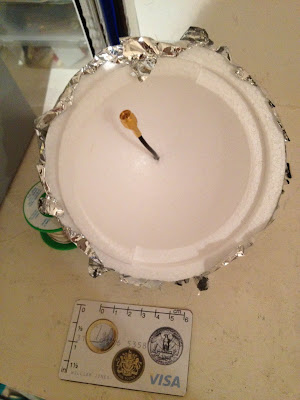 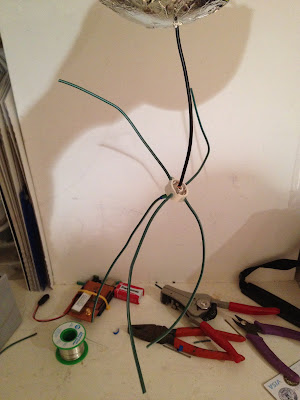 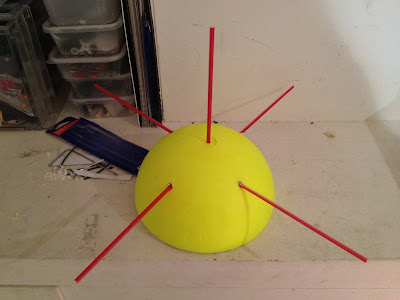 The flight computer is the same one that flew on GAGA-1 with a couple of modifications. GAGA-2 will fly without the external temperature sensor, I've added a direct power connection as space is tight and there wasn't room for the large connector used in GAGA-1 and I've added a strap to hold the piece together (GAGA-1 saw some pretty violent shaking while flying). I'm also using a single 9V battery. One of the failures in GAGA-1 was that the AA batteries became dislodged on landing causing the flight computer to lose power. 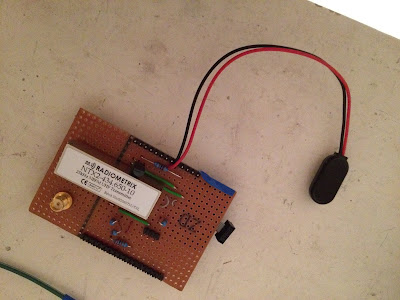 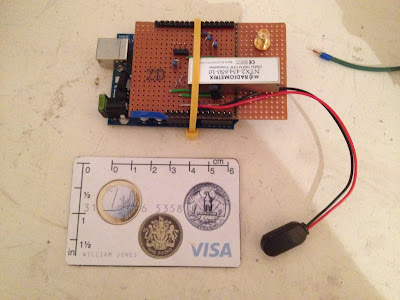 I've run a couple of battery life tests using standard 9V batteries. A really cheap and nasty Panasonic 6F22 only managed to power the flight computer for about 90 minutes before dying completely. A Duracell 6LR61 ran the flight computer for 17921 seconds (4 hours 58 minutes 41 seconds). On the day I'll actually be using a lithium battery because of their low temperature performance. Specifically, Energizer Advanced Lithium 9V which will work down to -40C (technical data sheet is here). 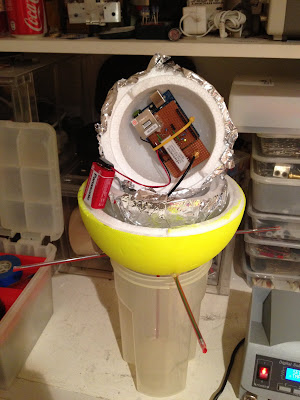 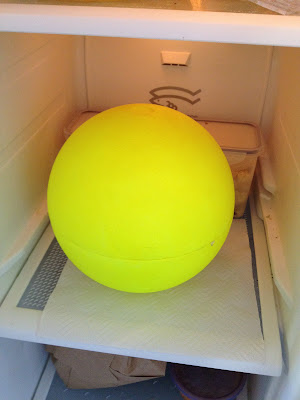 The temperature drop seems acceptable with expected internal temperatures around -10C (ignoring the fact that there will be internal heating from the radio transmitter). 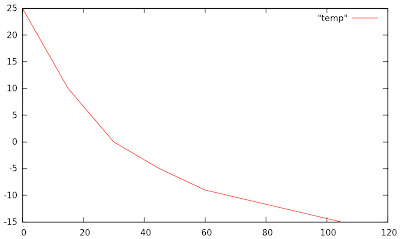 I'm using the same GPS module as GAGA-1 (a Lassen IQ) which is tiny, but this time I'm using an embedded antenna that will be inside the capsule on top of the Mylar film. Tests show that this work well. From a totally cold start I had a GPS lock in 115s in my back garden. 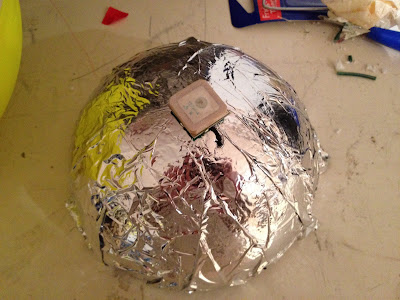 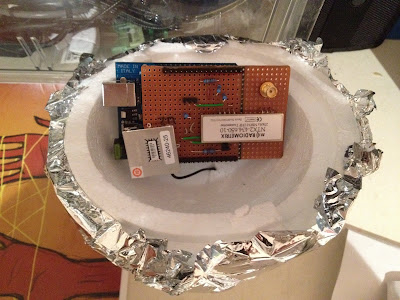 Next steps for GAGA-2 are:

1. Rewire the cameras so they use a larger external battery to get enough filming life. Then freeze them to see if they still operate at low temperatures. Then mount them.

2. Take the capsule out for a transmission test to make sure that the antenna is good enough.

3. Wait for a calm day for launch.

carlosreif said…
I wish you success
11:52 AM

carlosreif said…
I wish you success
11:52 AM

Clint Laskowski said…
This is so cool. I never thought about launching a balloon (but I've been into model rockets for years), but your extensive write-ups are making me reconsider. It must be very exciting to recover the capsule and see the data and images (and this time, movies) for the first time. Best of success on your GAGA-2 mission!
1:47 PM

Kevin Vermeer said…
You could probably cut the weight of your flight control computer to half or less of the current weight by creating a custom PCB. Ditch stuff like the USB and power connectors and circuitry, the shield headers and receptacles, the prototype PCB, the big DIP used on the Arduino. Replace these with a QFP or QFN ATmega and SMD passives, and your entire "flight computer" could be just a couple inches square and much thinner. The Arduino isn't designed for low weight!
5:26 PM