February 04, 2012
I have a stack of half finished projects that I'm trying to complete. Happily, the first one was finished late last night: a long range WiFi antenna made using an empty coffee can. Working from the ideas here I made an antenna from the following:

2. A Type N bulkhead socket and a Type N plug

3. A piece of WiFi antenna extension cable with a reverse SMA connector on the end.

4. A short piece of coat hanger for the active element of the antenna

Here's a shot inside the can showing the antenna element and the Type H bulkhead socket screwed into place. I simply drilled five holes in the can using a HSS drill. 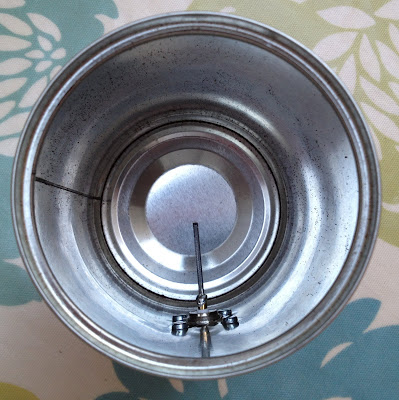 And from the outside: 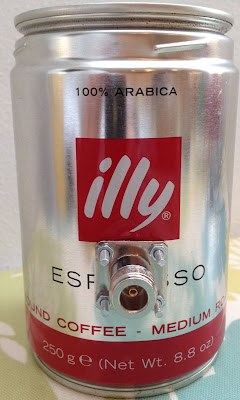 The active part of the antenna is made by soldering a piece of coat hanger into the Type N bulkhead connector. 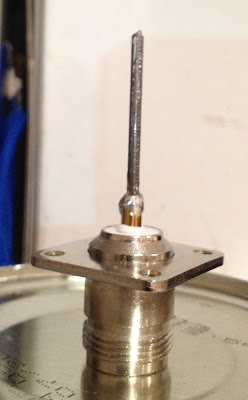 For testing I'm using a USB WiFi adapter that has a reverse SMA connector on the side:

The cable was pretty simple to make, all that was needed was connecting the Type N connector on one end: 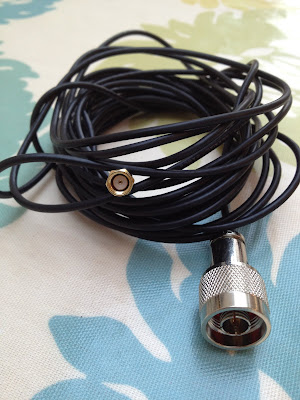 And the coffee can lid proves handy because the adapter and cable can all be stored inside the can when not in use. I made a little cover for the bulkhead socket using the neck of a balloon that I tied and turned inside out: 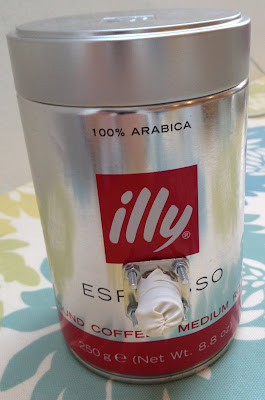 Testing using a combination of iwlist and Kismet showed that the antenna was both directional (as would be expected from its design) and more sensitive than the little whip antenna.

From the top room in my house I could see 58 networks using the standard antenna and 97 using the can pointing in one direction. The received power was on average between 3 and 9 dB better with the antenna for distant networks and had much greater range (that's between 2x and 8x better).

About 1/4 mile from my house (actually 423m or 0.26 mile or 1386 feet) is a business hotel that offers its guests free WiFi. Pointing the antenna in its direction I was able to connect to the hotel WiFi (which doesn't have a WEP or WPA password) and then reach a screen where I had to agree to the hotel's terms and conditions for use of their network.

Looks like I've got a backup connection if my home broadband goes down.

PS There are lots of details missing from this blog post because I linked above to a very detailed explanation of the whys and wherefores of building a can antenna.  Look there for critical details on picking a can size (the Illy can is a good size for the frequency of WiFi), the length of the active element, and the position within the can.   The other thing that's worth noting is that I shortened the cable going to the antenna as it was too long: the longer the cable the worse the loss.

Unknown said…
Could you explain a bit more on what the coat hanger piece is for? What do you mean by 'active' for instance? Is it linked from the top to the side?
4:11 PM

Ceno said…
Did you have direct line of sight to the hotel?
6:36 PM

Ceno said…
Did you have direct line of sight to the hotel in question?
6:47 PM

Unknown said…
This is possibly misleading information, the pigtail cable you used is way too long to use to add any sort of boost to your signal.
7:40 PM

Unknown said…
my wifi card has two outputs for the antenna. would it be be possible to do this but only plug into one side? If not, does a dual cable that goes down to a single SMA exist? Thanks
5:49 AM

Anonymous said…
How long is the piece of coat hanger wire inside the can? I imagine that is important to pick-up the right frequencies.
8:10 PM

ACR said…
That length of coax is likely incredibly lossy.
2:26 AM

ColiN said…
There is a hole in the little socket connected to the can. And what he means by active is that it's the piece receiving the signal and transporting it to the coaxial cable.
3:13 AM

ColiN said…
Idk if this will work but u may be able to strip the wire near the adapter down to the small copper wire and "create" two coax cables by adding male ends to each side and then putting an amplifier in between to make the signal stronger. I do it for my antenna TV all the time
3:17 AM