February 07, 2012
As a child I'd made a crystal radio set and had been meaning to make one again when I came across stories of foxhole or PoW radios made from scavenged parts. These were made during the Second World War (and other wars) from copper wire from a broken motor or alternator and anything from which a diode could be fashioned.

So, I decided to give it a go. Here's my foxhole radio. It's made from: a toilet roll tube, some copper wire, a blue steel razor blade, the tip of a pencil, a piece of coat hanger and an earpiece. Connected to ground and a long wire antenna in the garden it works... just. (PoW's seem to have used the barbed wire of the prisons they were held in as antennas, I used a long piece of bell wire). 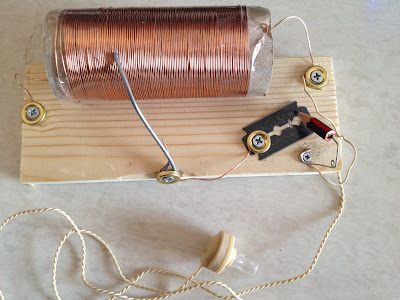 1. A coil of enameled copper wire wound about 100 times around a toilet roll tube. I used 22 SWG wire.

2. A tuning arm made from a piece of coat hanger than can sweep across the coil to find radio stations. The coil's actual copper is exposed where the arm sweeps by sandpapering off the enamel coating.

4. A diode made from a blued steel razor blade, the point of a pencil and a safety pin. I bought a blued steel antique razor blade on eBay after having trouble with the modern blade that I blued myself.

Modern blade blued on the gas stove (I just held it with pliers in the flame until it turned blue which took just seconds). 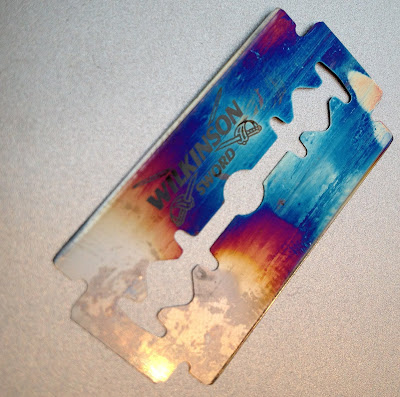 And the antique blued steel blade from eBay:

The antique blade worked well (i.e. I was able to find sensitive spots on it with ease, the modern blade was a pain).

Here's the end of a pencil and safety pin combination: 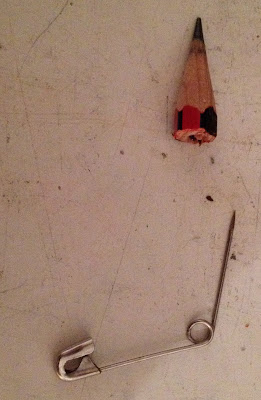 The antenna connects to the bottom end of the sweep arm (to the screw in the middle of the picture) and the ground connects to the right hand side of the coil (to the screw at top right, the screw top left is not used). Using the radio involves finding a radio station by sweeping around and adjusting the pencil lead so that the signal is detected. I found it easiest to sweep around for some crackles and then fiddle with the pencil to find the right spot on the blade. Once found the pencil is left in place and not moved again.

The circuit is essentially the same as this classic design with my razor blade/pencil combination instead of the cat's whisker detector in the picture. 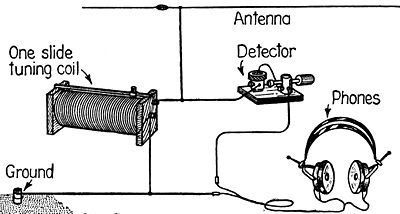 The radio works because the razor blade and lead combination form a point contact diode which is able to detect the AM radio signal.

There are three radio stations that I can hear using the set, the loudest one appears to be Sunrise Radio an AM station catering to London's Asian community. Here's a recording of a few seconds of reception using my radio (it's very quiet, turn your volume right up): MP3.

There are lots of improvements that could be made. Currently, there's no capacitor in the circuit and so it is relying on capacitance in the antenna to make a tuned circuit. Fashioning a capacitor from aluminum foil and newspaper would probably help.

Unknown said…
Hi
I like your no-nonsense description how to go about building a set. Wiki and the rest are useless.
I have a question or two.
1. How thick was the copper wire you used and does it matter how many turns you use? The more the better or just one layer?
2. Will a quartz crystal about 30 mm (1 1/4 inch) do in place of a razor blade?
Cheers. Peter
9:55 AM

Jean-Pierre Tremblay 2010 said…
Hi peter, i m an electronic technologist. The wire as to be 22 agw or greater. Too small would induce higher resistance. Number of turn is important, and related to coil diameter.

Dont bother with a cristal. Go buy a germanium diode if u dont want to struggle with the razor blade
4:27 PM

Jean-Pierre Tremblay 2010 said…
This comment has been removed by the author.
4:36 PM

Jean-Pierre Tremblay 2010 said…
...i dont have the exact turn number by heart, but u will find on internet. Better more than less but 200 woulb be prohibitive ;)
4:50 PM

Jean-Pierre Tremblay 2010 said…
One neat layer is ok. Use tranformer winding wire ( it has an isolating varnish. U must avoid shorting winding,so when u sand the very top of coil(as describe by John), do it gently.
9:48 PM

Unknown said…
Jean-Pierre, you've made my day. Thanks for bothering to reply... I am quite motivated now to try and build one myself.

Can the antenna be a colour bond fence (powder-coated moulded sheet steel), or a chicken wire fence (galvanised mesh), or thin plastic coated copper wire? I also have a 1/4 inch woven galvanised steel cable about 10 meters long that I could use.

Unknown said…
Wonder.... what the diode measurement for that point contact diode thing would have been.
6:11 PM