February 24, 2012
Recently, I joined a new company called CloudFlare where I was asked to pick a job title. I decided to go with Programmer. It was the first job title I ever had: 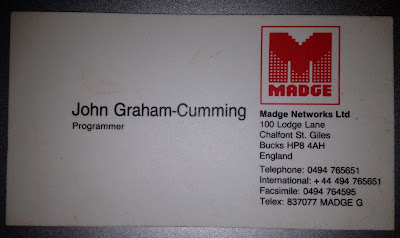 (Notice how at my first job there was no email address, but there was one for Telex.)

I choose Programmer for both its simplicity and accuracy. I am working as a programmer helping to speed up and protect web sites, and other programming-related job titles seem overblown. Software Engineer always seems like an overly grand way of saying the same thing. And I'm certainly not a Computer Scientist.

Fundamentally, I make computers do what I want them to do.

Of course, people like to come up with grand titles. I once had the stupid title of Chief Architect. And there's a whole variety of Lead Engineer, Principal Engineer, etc. This is partly done so that in large companies people of different seniorities are distinguished and partly so that people feel important.

It might seem lowly to be a Programmer, but in a world where so much is driven by computers there's nothing shameful in being the person who makes them go. 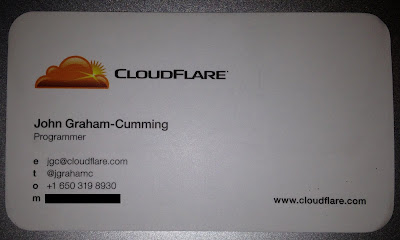 be_slayed said…
That's cool that you joined CloudFlare - congrats on the new job. (I recently started using them.)
5:23 PM

And kudos to CloudFlare for allowing you you to call yourself what you really are.
7:20 PM

Anonymous said…
Thank you for (once again) redefining «programmer».
7:53 PM

mikej said…
You might like the short editorial I wrote for a now defunct paper magazine called Visual Systems Journal which I "reprinted" on I Programmer
http://www.i-programmer.info/professional-programmer/i-programmer/27-i-programmer.html

I agree with you but when we ran a poll
http://www.i-programmer.info/news/88-site/2059-february-poll-results.html
Programmer only just beat Developer
9:49 AM

Unknown said…
I’m sure years ago I heard that Ken Thompson, then still at Bell Labs, had “Coder” as his passport occupation.
1:49 PM