Getting around the London 2012 branding police

April 16, 2012
The Guardian reported the other day on the London 2012 Olympics branding police who ensure that words like London, 2012 or Games aren't being used by people who didn't pay to use them:


As well as introducing an additional layer of protection around the word "Olympics", the five-rings symbol and the Games' mottoes, the major change of the legislation is to outlaw unauthorised "association". This bars non-sponsors from employing images or wording that might suggest too close a link with the Games. Expressions likely to be considered a breach of the rules would include any two of the following list: "Games, Two Thousand and Twelve, 2012, Twenty-Twelve".

Using one of those words with London, medals, sponsors, summer, gold, silver or bronze is another likely breach. The two-word rule is not fixed, however: an event called the "Great Exhibition 2012" was threatened with legal action last year under the Act over its use of "2012" (Locog later withdrew its objection).

And today I received a funny email from Novotel where they are forced to use euphemisms for the London 2012 Olympic Games because they are clearly not an official sponsor.  It reminded me of the wonderful world of email penis enlargement spam where filters would spot all the common terms and spammers would insert "male enhancement" and other terms to get through.

Here Novotel is forced to refer to "London's summer of sport" and "London's Big Event".  So, that's how you do it folks, think like a penis enlargement spammer and you can talk about the London 2012 Olympics all you want. 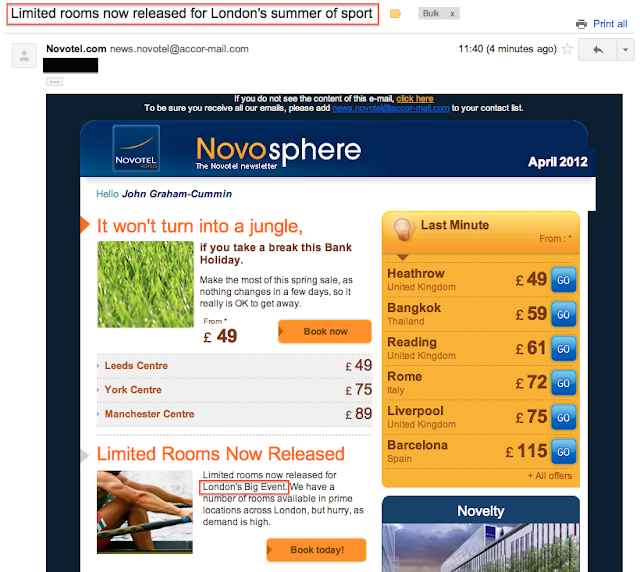 My blog is in no way associated with the Londinium 0x7DC Ολυμπιακοί Demonstrations of World Class Athletic Ability.  But if you do wish to talk about them, may I suggest the official name Londinium MMXII and hash tag #mmxii.  And here's an alternative logo representing the five interlocking benzene rings of benzopyrene: 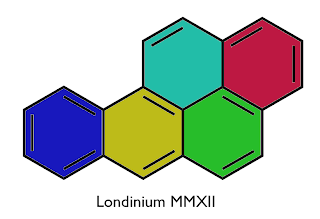 Why benzopyrene you ask?  Well, it's because benzopyrene messes up DNA transcription (or copying).  So benzopyrene is a reminder to not copy any of the official DNA of London 2012.

Eric TF Bat said…
Back in 2000 when the Olympics were in Sydney, an old girlfriend of mine preferred to refer to them as The International Sports Gymkhana. Feel free to use that too.
1:32 PM

Greg said…
The same thing happens every year here in the US with the Super Bowl. You'll see phrases like "The Big Game" from non-sponsors.
2:00 PM

Richard Carter said…
Tickled by the fact Google marked that email from Novotel with the 'Important' tag.
2:17 PM

Loïc d'Anterroches said…
By the way, Benzopyrene is boiling at pretty high temperature maybe a sign that this policy will lead to heated debated :)
3:21 PM