Simonoids. It's 'Simon' in an Altoids can powered by Arduino

May 10, 2012
The classic game Simon came out in 1978 and used a microcontroller (one of the first) at its heart: the TMS 1000.  The circuit for Simon is pretty simple and can be seen in the patent filing #4,207,087.  Its simplicity makes it ideal for implementation as a hobby project with a microcontroller such as Arduino.

My Simonoids is an Arduino-based Simon game that fits inside an Altoids can: 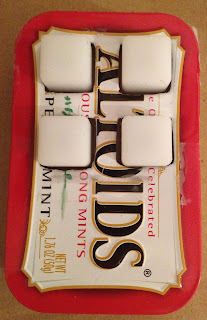 The four illuminated keys are a SparkFun 2x2 Button Pad and the associated PCB fitted with four different colored LEDs.  Each LED is connected to a single Arduino digital pin with a 330 ohm resistor to limited the current passing through it to about 10mA.

The four LEDs are soldered into the PCB with the cathodes tied together, the anodes go to the Arduino via the 330 ohm resistors.  The four buttons are also tied together and jumpers are in place in the middle of the board to wire them correctly.  In total the PCB uses 4 digital pins for the LEDs and four digital pins for the buttons.  The internal pull-up resistors on the Arduino are used to ensure that the buttons are pulled high and only pulled low when a button is pressed. 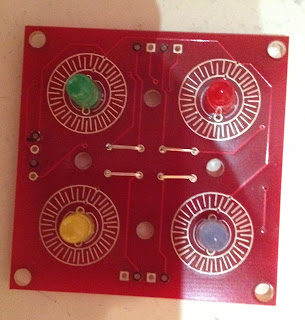 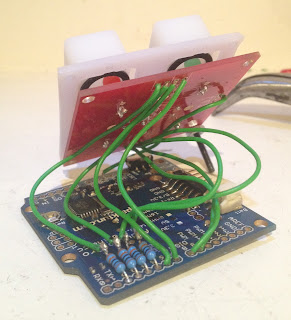 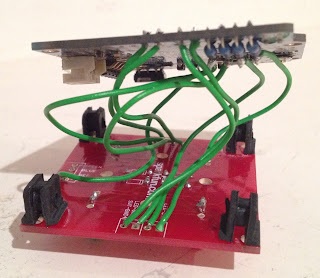 The final parts are a battery connector, on/off switch and a piezo buzzer connected to another Arduino digital pin.  Setting the digital pin to 1/0 with the right frequency will generate a square wave.  The frequencies are chosen to be the same as those used on the original Simon (G below middle C, middle C, A above middle C, G above middle C).

The button pad is kept in place with a rubber band around the boards; it keeps the sandwich together. 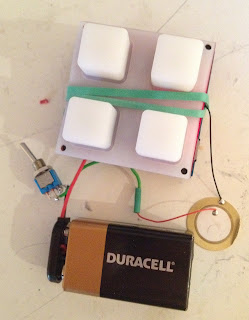 The sandwich is placed inside the Arduino can and screwed into place through holes in the Arduino Pro.  The power switch gets its own hole and the key pad fits through holes drilled and then carefully bent to shape using pliers.  To help make the large holes I first made a cardboard template and stuck it to the can for drilling out: 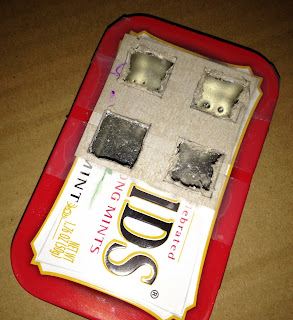 To make programming the game easy I position the Arduino Pro so that the I/O port header points into the space where the battery goes.  That makes it possible to insert an FTDI cable and program the game without unscrewing the boards. 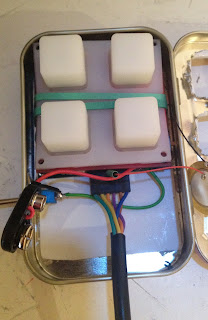 Once programmed (the code I wrote is in my Simonoids repository on Github) it's just a matter of connecting the battery. 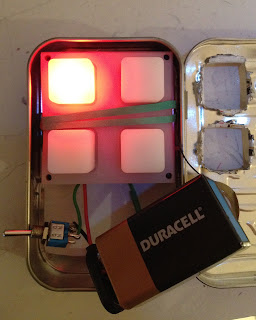 And close the lid and you've got a portable, home-made Simon game. 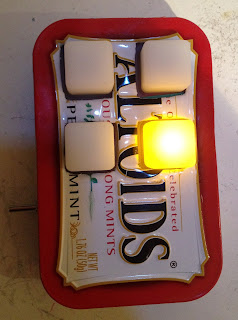 And, finally, here's a short video of it in action:

My other Arduino-based projects are: Cansole (video games console in a can), programmable 7x7 Color Display (from a set of hacked Christmas lights), and GAGA-1 (high-altitude balloon).  If you're into this sort of thing then you might also enjoy the Ambibus (an ambient 'next bus' monitor in a model bus).

PS While writing this blog post I discovered that SparkFun sells a Simon Kit for those who like to start with a complete set of components.