May 16, 2012
With all the chatter about how uber-amazing Node.js is I figured I'd do a little comparison with my favorite language du jour: Go.  Node's claim is that it's "a platform built on Chrome's JavaScript runtime for easily building fast, scalable network applications." 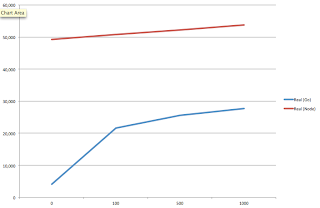 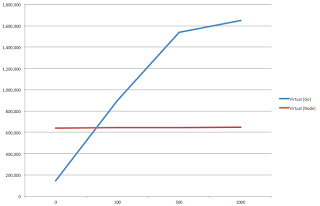 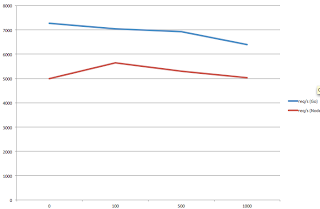 Anonymous said…
Isn't the Go version using all CPUs whereas the Node version is using just one? Would be nice to test with a version using Cluster.
6:29 PM

brad clawsie said…
well one of the strengths of Go is that you don't need things like Cluster to exploit modern hardware. Go has it baked-in.
6:37 PM

brad clawsie said…
This comment has been removed by the author.
6:37 PM

brad clawsie said…
This comment has been removed by the author.
6:38 PM

I seem to recall Go doing even better once you made them do the same work.
6:51 PM

When node is running:

When Go is used:

Node isn't sending the Date header, but it is sending Connection header.
6:56 PM

pankaj said…
From these numbers, Node seems to perform better when under load. On the other, Go's resource consumption spikes up across all metrics.

pankaj said…
Go's resource consumption spikes up across all metrics in your second test of 100 concurrent requests. Node is handling this load much more gracefully.
I am new to Go...any idea why this behavior under load ?
8:06 PM

Unknown said…
Don't forget you can write your Node code in CoffeeScript which has great syntax and is fantastically literate, and that you gain the advantage of all the server-side JS libraries that are popping up.

Of course 'real' (thousands of users, etc) applications should probably be written in a compiled language, but for toy, prototype, or specialty applications (I've written small web applications that only 10 people will ever use and probably not even concurrently) Node has its place.
12:02 AM

While Node.js increases its performance in the second test, Go makes things worse :-)

Would be nice to try with more connections in parallel and then creating some graphs.

You cannot perform just 2 experiments to state something boldly :-)
6:45 AM

Holger said…
I recently watched a presentation about Haskell and during that a graph was put up which claimed that for a trivial benchmark like this, go really did outperform go, but all three Haskell libs tested outperformed go as well. I.e. using all cores is good but using all cores more efficiently is even better.
9:38 AM

This is on an older Macbook Pro than the one you used for your Node & Go tests.
2:35 PM

TechShaman said…
This comment has been removed by the author.
11:39 PM

Then run the tests.

Here are my findings, which show that node isn't that bad, in fact it consistently outperformed go in all tests:


Of course, results from a hello world test are hardly an indication of how a platform performs in the real world.

Go looks like a promising language, I would definitely like to learn it.
I'm sure it's a powerful tool, knowing that Google is behind it and I assume it performs well in production.

I've been very satisfied with node so far, not just for it's speed, but for the community and collection of open libraries out there.

I've never used it in production, though, but it's potential as a programming tool is great.

It is a handy little tool which gets a lot of things done fast.

Combined with coffee script, this is the fastest way to prototype almost any kind of (non-gui) app.
11:40 PM

kyb said…
How is the go code configuring the handler for the server that's instantiated later? It looks like it's doing it with a global static which would immediately make me want to avoid it at all costs.
12:13 PM