A water rocket made from household bits and bobs

September 21, 2012
Last year I made a 'Ponyo' boat out of an aluminium can and a juice carton following the instructions from Science Toy Maker. This summer when the weather was nice enough I followed his instructions for a simple water rocket launcher made from a pen and a piece of PVC tube.

The nice thing about Science Toy Maker is that all the stuff he makes uses the minimum number of tools and a maximum of common items. The water rocket launcher needs the following: a bicycle pump, a "Bic" pen, a length of PVC tube, a candle, and some glue. Add a drinks bottle for the rocket.

It's pretty simple. The length of PVC tube is pinched at the bottom end (on the right) to seal it, a hole is made for the bicycle pump connector made from the pen and a neck is made to rest the bottle on. Since the PVC melts at a low temperature he uses a candle to do all the work.

The first job is to heat the PVC pipe at the point where the drinks bottle rocket's neck will rest while it is pumped full of air. 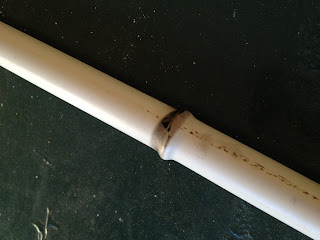 All you do is heat up the pipe a bit (rotating it around for even heating) above the candle flame and then gently push to make a little bulge in the pipe. That's where the neck of the upside down drinks bottle sits.

Next you cut up a small pen to make the bicycle pump adapter. I used a simple "Bic" pen like this.

Then you make a hole in the PVC pipe near the bottom and heat the hole up until it's possible to push the pen segment in. I glued it all around with rubber-toughened superglue. 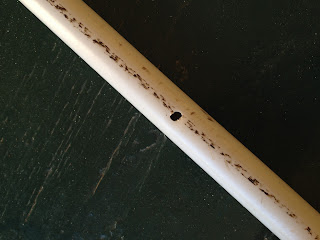 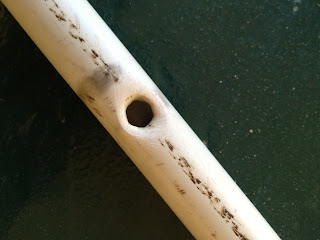 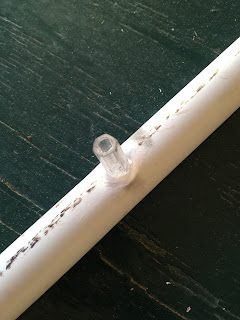 The finally stage is to seal the bottom of the tube. That's done with the candle again to soften it up, then pinch it and let it cool. Any space can be filled with glue. 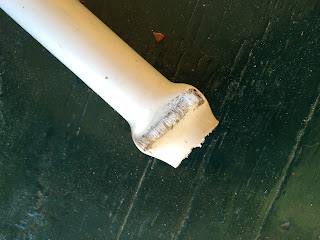 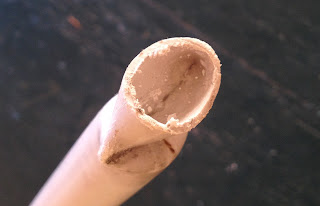 After that you just attach the bicycle pump to the connector, partially fill the drinks bottle with water, stick it on the top, pump and let it fly. Check out this video from Science Toy Maker.

Water rockets are easy to make and use materials found in daily life.
Children will be thrilled, and their creativity stimulated, watching
their hand-made rockets soar skyward to unexpected heights. Water
rockets that perform well have good science behind them. Similarly,
behind every failure is a scientific concept that has been violated.So
it is essential that children understand the fundamentals of water rockets
6:26 PM