A couple of years ago I wrote about a security conundrum left by Leo Marks in his excellent book Between Silk and Cyanide. The conundrum appears on this page: 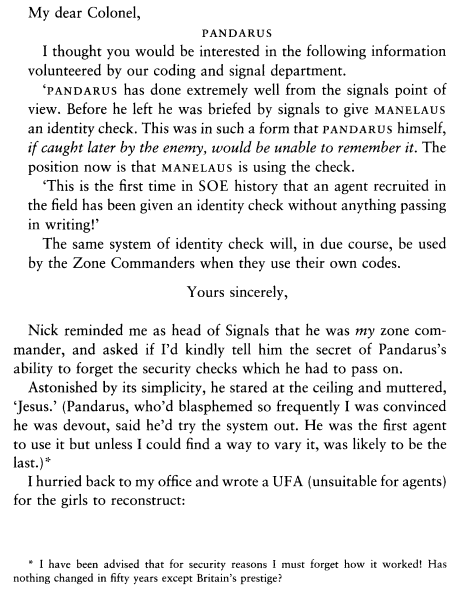 And specifically, the sentences:

Before he left he was briefed by signals to give MANELAUS an identity check. This was in such a form that PANDARUS himself, if caught later by the enemy, would be unable to remember it.

But Marks doesn't reveal how it worked having been told at the time of publication that it must remain a secret. My 2011 appeal for assistance resulted in a number of interesting ideas (read the original comments).
I most liked the idea that MANELAUS might be able to read music and PANDARUS might not. So PANDARUS could have carried a code word written out as notes on a stave. MANELAUS could have turned these back into the actual security code word either via the letter notation (A B C D E F G H) or the solfège (Do Re Mi Fa Sol La Ti Do).
Of course, the general version of this is for PANDARUS to take with him something that only MANELAUS understands (e.g. suppose MANELAUS can read Mandarin but PANDARUS can't).
Another possibility as occurred to me. Suppose that MANELAUS were colour blind and thus saw colours differently than PANDARUS. It would be possible for PANDARUS to carry a silk of words printed in many colours and then tell MANELAUS that the blue words were the identity check.
Since PANDARUS and MANELAUS would see the words differently there would be no way for PANDARUS (even under torture) to reveal what MANELAUS had seen. This could be further complicated by having just a sheet of letters in different colours; that way PANDARUS wouldn't remember any individual words at all.
Unfortunately, both these schemes seem not to fit Marks' description because the letter he quotes says that nothing was passed in writing.
Which leaves me to think that PANDARUS neither memorized nor carried with him something to tell or show to MANELAUS.
So perhaps SOE did something to PANDARUS before he left. For example, they could have given him something to drink that would have changed the chemistry of his urine. And then he would have supplied MANELAUS with a urine sample who would use some indicator chemical: the resulting colour being the identity check word.