From the ground up (or how to encourage a school boy)

Following on from my popular blog post about coding by hand in 1985 I dug into my pile of old stuff to look at how myself and another boy at school reverse engineered the Research Machines CHAIN network and built everything from networking protocols to a network management system in assembly language.

In 1982 Research Machines in the UK launched the LINK 480Z Z80 based machine that had an optional 800kbps proprietary network called CHAIN. My upper school got a small network of them linked to a file server running MP/M. The 480Z's would boot from the file server across the network. 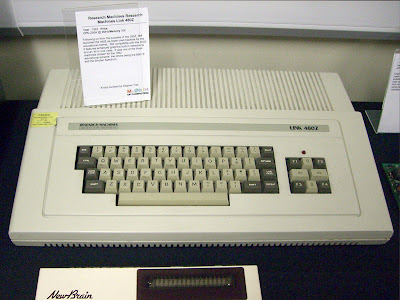 Unfortunately, the entire network protocol was undocumented by Research Machines and unpublished. Myself and another boy, P, decided to reverse engineer because we wanted boot control and we wanted network access. Disassembling the running operating system (often using its front panel, which was on screen and not via flashing lights) we were able to determine that the Z80 RST 8 instruction was used to send/receive packets on the network.

The CHAIN network supported up to 255 machines (each machine had an 8-bit DIP switch to set its address) and was similar in operation to Ethernet in that packets could be lost when collisions occurred. The built in operating system provided access to files on the file server; we wanted much more. Specifically, we wanted reliable remote control of any machine on the network.

Once we had decoded how RST 8 worked we quickly realized that (a) we could see every packet on the network and so could build a protocol analyzer (we built that and called it NETSCOOP) and then built a program just to watch file system access by all other users and see what files they were reading/writing and grab their contents. 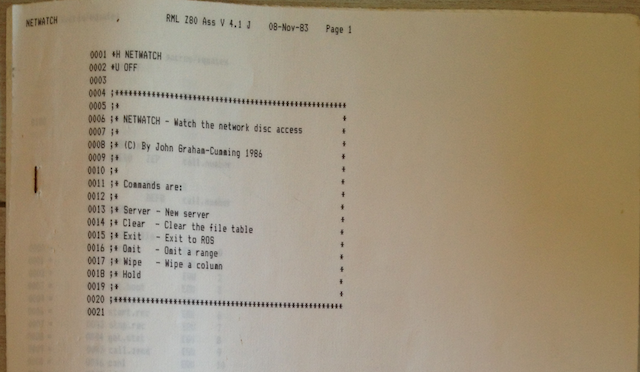 But that was just passive so we went a bit further. P came up with the idea of building a reliable protocol on top of the unreliable CHAIN network. His idea was to send a sequence number in each packet and then acknowledge the packet (I don't recall whether he read about this idea or came up with it alone). If we didn't get the acknowledgement then after a delay we'd resend. He wrote up some Pascal pseudocode and I coded what we called 'safe network transactions' in assembly language: 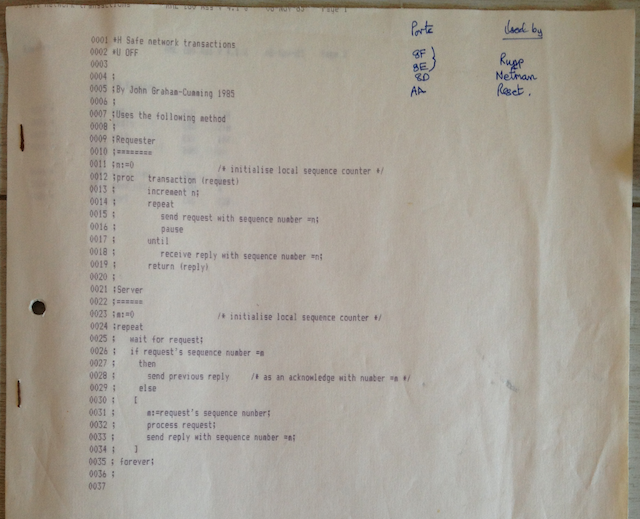 Once we'd got that coded we were able to start building up a network OS of sorts. The first step was to build something we called NMBOS which gave us basic functions across the network to any machine running it. 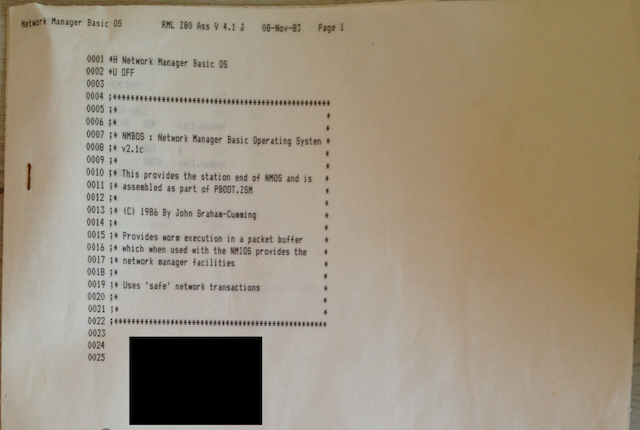 The most interesting feature of that is that it operated using what we called 'worms': executable code sent directly to the machine and executed in the packet buffer. We had all this working in 1984, but it appears I added nice comments to the code and printed everything out in 1986.

The word 'worm' is interesting because this all precedes the famous Morris Worm by a few years and I'm pretty sure we got the name from John Brunner's Shockwave Rider.

This worked by simply assembling some function you wanted executed and then sticking it in the send buffer and reliably sending it to the remote machine which would simply execute it. By using self-modifying code we could prepare routines to be executed remotely and modify them before a send. Here's the actual receive handler. In the middle you can see the call into the packet buffer. We only had (if memory serves) about 128 bytes of receive space, but it was plenty. 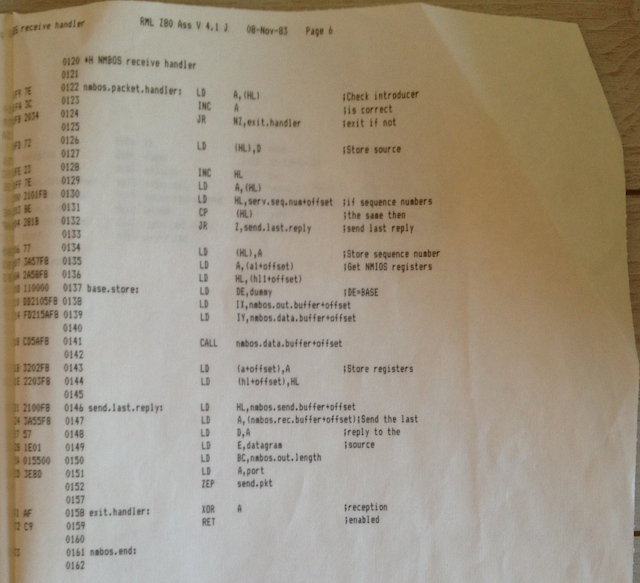 Having built that we created the NMIOS which used the worm functionality to provide slightly higher level function (such as writing characters to the screen, insert characters into the keyboard buffer, and even reading and writing arbitrary memory locations on the remote machine!). The NMIOS could also be called from Pascal or assembler. 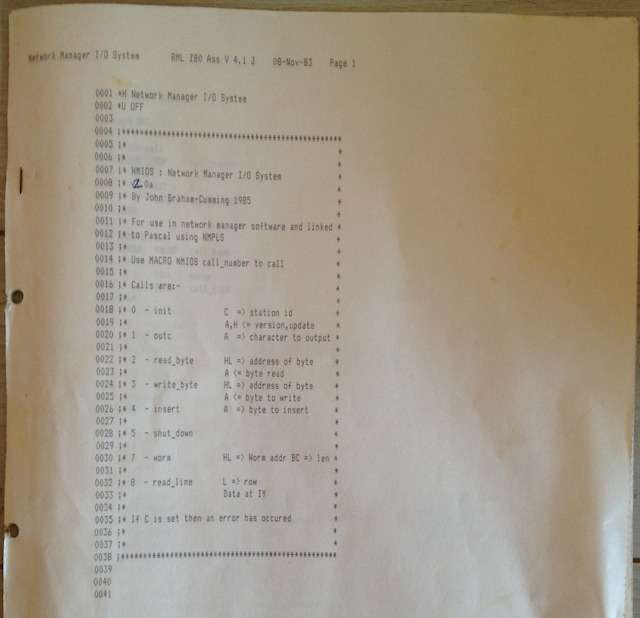 From there we were able to build the manager system called NETCON which allowed the teacher to control all the machines simultaneously and included a 'virtual blackboard' mode where they could write to the screens of all machines. Other functions allows them to freeze machines (to get the pupils to pay attention). After that we went on to write two-way chat programs, peer-to-peer file transfer and a nice program that linked two CHAIN networks together of a 1200 baud modem (essentially a router). 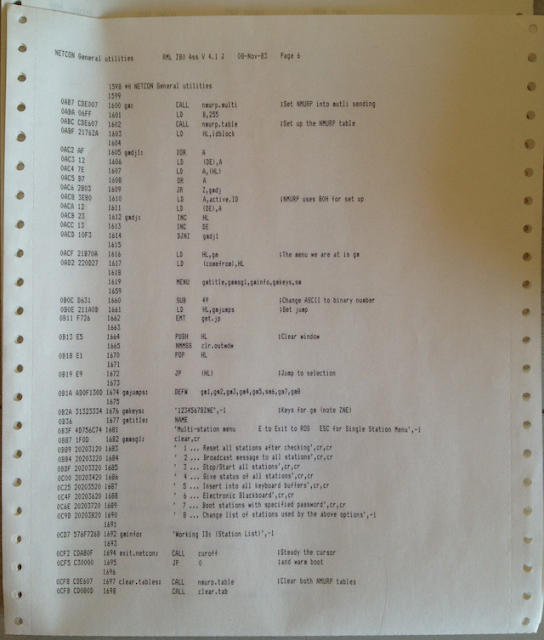 During 1984 I wrote to Research Machines and asked them for assistance. I was hoping they'd give me documentation to RST 8 so that I could have the official information not what we'd reverse engineered. I received the most wonderful reply. 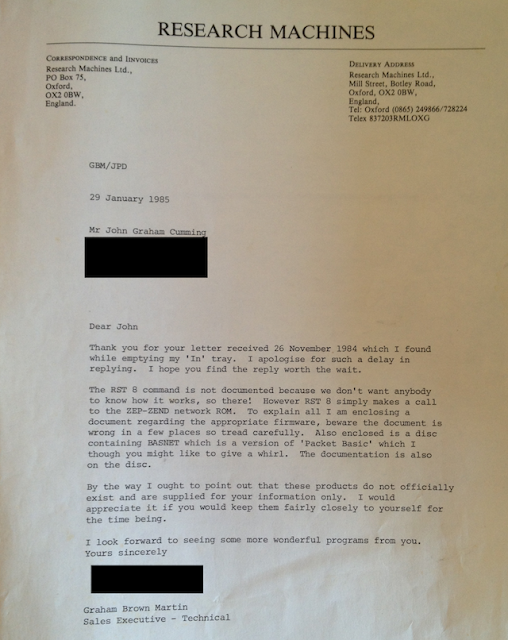