The two problems I had to solve in my Oxford interview

May 02, 2013
Back in the 1980s I went to Oxford University and studied Mathematics and Computation (this was almost the entire Mathematics course plus Computer Science added on; the degrees offered today are a little different).  Having sat the mathematics entrance exam and gone through all the mathematics interviews I had interviews in the Programming Research Group (now the Department of Computer Science). During those interviews two specific programming/algorithm design questions were posed. Here they are (I made up names for them).

The computer's CPU only has three instructions Z, I and J as follows:

I. This instruction adds one to the contents of a memory location. For example, I3 adds 1 to whatever is currently stored in location 3.

When there are no more instructions the program stops. 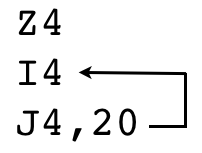 2. Under what circumstances does this program fail?

(If you've studied computer science you may recognize this problem)

On the ground along Keble Road there are a line of n buckets, in each bucket is a single ball. The balls are red, green and blue. A robot is to be programming to sort the balls so that there's one ball in each bucket still but the colours are now in the order red, green, blue. So, working from left to right an observer will see all the red balls in buckets, then all the green balls in buckets, and finally all the blue balls.

1. Program the robot to sort the balls.

2. Write out a proof that the proposed algorithm works.

Of course, a whole load of other questions were asked about program running time, correctness and what I later realized was the lambda calculus. But these were the two main 'programming' tasks.

CoachDom said…
Damn in the last solution i forgot to initialise [2]
So insert Z2 command at second line, and add +1 to all memory address for jmp ! :)
5:34 PM

John Graham-Cumming said…
@CoachDom: the first solution is good, but the one handling the zero case is not.
7:42 PM

phil said…
This ought to work if the two numbers are non-negative integers (and not too large, obviously):

The second problem's impossible, isn't it? Perhaps I'm mis-reading it.

Suppose there are 3 red balls, 1 green and 2 blue. If the first ball you come across is green, it needs to go into the third bucket from the right. But you don't know that until you've examined all the other balls. That would break the rule about deciding what to do with a ball immediately after examining it.
8:53 AM

John Graham-Cumming said…
@Unknown: the second problem is not impossible.
9:48 AM

Josh said…
I think this should work:

Josh said…
EDIT: made a couple of typos in the summation loops.

I think this should work:

I got the exact same answer as you for the first question.

However, for your solution to the second problem, i don't think it satisfies the condition that the robot is only allowed to examine each ball once. Phil's solution looks like it should work and meets this criteria.
4:38 AM

This program will enter an infinite loop if any location has a negative number (as per the example).
5:17 AM

Anatoly Vorobey said…
It's a little tricky to take care of the case when both numbers are 0.

I managed with 17 instructions, I think this works provided 0 and 1 are integers >=0. I first check explicitly for the "both 0" case. Register 10 stays zero throughout (except in that first check).

First listing works for non-zero values (it may work for 0 depending upon what occurs when i command is run on max-int values).

Second listing works for values including 0.

Both may work on negative values depending again upon what occurs when i command is run on max-int values.

Both require only memory locations 0,1,and 2. Preservation of inputs was not a requirement.
7:08 AM

Unknown said…
Your 'Z-machine' is a Turing machine I believe from memory.
8:23 AM

Just 13 line. It doesn't consider Any number less than 0. Seems like no one noted down there is a floating point number mentioned in the system example. So I can say my code considers only positive integers and zeros.
9:02 AM

Unknown said…
Has anyone solved this in under 13 OPS

This only works for positive intgers
1:45 PM


Handles the 0 case and doesn't use any additional memory.
Assumes that uninitialized memory will never equal 0, thus `j0,3 -> x` acts as an unconditional jump to `x`
10:35 PM