The hollow triangular numbers are divisible by three

June 26, 2013
You might be familiar with the triangular numbers: the number of objects that form equilateral triangles like this:

But what about the hollow triangular numbers? The ones where you take the middle blobs out of the triangles and just leave the border. Like this:

The pattern there is very simple. They are all multiples of three. And the formula would be that the hollow triangle with a base of size \(n\) has \(3 * (n-1)\) blobs in it (and since that's a multiple of three so is the number of blobs in a hollow triangle).

Here are three ways to prove that that formula is correct. 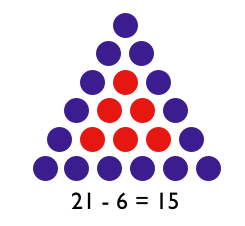 Counting around the outside

Another way is to follow around the edge of a triangle and observe that, for example, for the hollow triangle with a base of six the total number of blobs is \(6 + 5 + 4\) (the blue blobs, plus the red blobs, plus the yellow blobs). 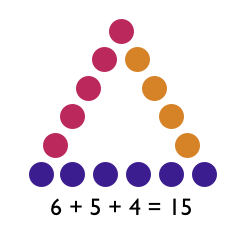 But a real mathematician is likely to prove this in a different way using mathematical induction. That works by beginning with some starting case that can be seen to meet the required statement and a way of going from one case to another.

So, all you need is to examine one step in this infinite chain of reasoning.

Take a look at the following diagram showing the hollow triangular number with base six (on the left).

Back to the triangular numbers

Now that we've got the idea of mathematical induction it's possible to return to a claim a made at the start: for the filled in triangles the number of blobs is \(n * (n + 1) / 2\) when the base has \(n\) blobs. That too can be proved by induction.

PS I spotted all this staring at the duvet cover the other night. But then again there was that flight I took back in 2008.

PPS In the comments reader tz points out another way to see that the number of blobs in a hollow triangle is a multiple of three. There are three corners and three equal length sides (when ignoring the corners). 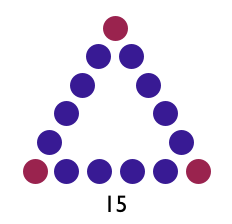 tz said…
Also in each case, the length of each side is equal, but the corners are shared, so the number will be the length of one side minus one, multiplied by three. Or since the lengths are identical, the non-corners will be 3N, and 3 corners, which would also be a multiple o 3.
11:59 PM

Brian Oxley said…
This comment has been removed by the author.
10:59 AM

@tz I would describe it as each larger triange adds another ball to each corner. Three corners is three balls. The starting case is the "null triangle" consisting of no balls.

This generalizes to any hollow regular polygon. Balls increase as multiples of the number of sides.
11:00 AM

Wolfkeeper said…
This is highly related to the method of differences:

That's how Babbage was going to tabulate polynomials.

IRC the difference between (X+1)^n and X^n is O(X^n-1) so you can calculate successive polynomials in O(n) time using simple adding and multiplying by (often small) constants n times.
2:42 PM

CandorZ said…
Nice Article...
As descriptive as any one can want it!
5:43 AM

Andywal said…
It would have been nice if you had gone just one step further to prove how many blobs make up a pyramid of base(n) blobs.
6:52 AM

John Graham-Cumming said…
@Andywal: sounds like a good 'exercise for the reader'
11:33 AM

Dan Sutton said…
Ummm... the proof that they're multiples of three is obvious: to make the next bigger triangle, you add one dot to each side, thus three dots - it's impossible to make one that isn't a multiple of three!
4:42 PM