Coming soon: "The GNU Make Book" from No Starch Press

In July I withdrew from sale my self-published book "GNU Make Unleashed" because I was working on a new edition. That book is to be published by No Starch Press with the title "The GNU Make Book". 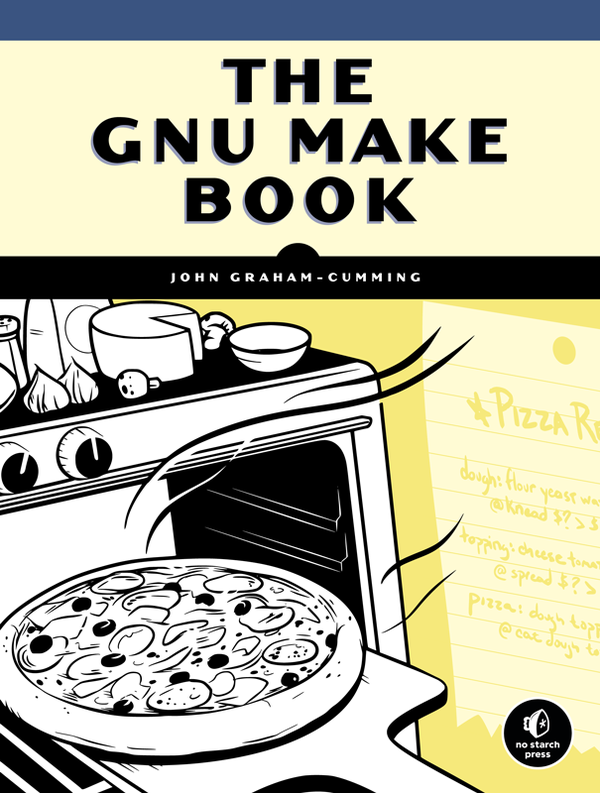 Details are not online yet but the text has been revised, edited, had a professional technical review and brought up to date with GNU make 4.1.

Some talks about the history of computing

Over the last few years I've done a number of talks that fall broadly under the umbrella of "History of Computing". Here are some videos for your enjoyment.


TEDxImperialCollege 2012: The Greatest Machine That Never Was

Computer science began in the '30s ... the 1830s. John Graham-Cumming tells the story of Charles Babbage's mechanical, steam-powered "analytical engine" and how Ada Lovelace, mathematician and daughter of Lord Byron, saw beyond its simple computational abilities to imagine the future of computers.

Looking back on 30 years of programming: there's nothing new since 1983. Examples and implications.

Fear your subconscious, not tech

Today, I've withdrawn my self-published book GNU Make Unleashed from sale because No Starch Press have agreed to publish the book. I've been working over the last few months to completely revise, update and extend the book.

That new edition will be published by No Starch Press. The title and publication date are still being decided.

Still on sale over at Lulu (where I had GNU Make Unleashed) is my page-turner A non-­mathematical introduction to ‘one-­way functions’ and their use in securing passwords.

Back on September 30, 2013 I decided to take a break from blogging and mothballed my site. Today I've restored everything.

In the intervening time I've been pretty busy with...

1. Writing a ton of blog posts for CloudFlare (and doing all the actual work that goes into those blog posts). In particular, the posts about the OpenSSL Heartbleed bug involved a lot of work.

2. Speaking at various events including Codebits in Lisbon;  GopherCon in Denver; a Many-to-Many in London; Secure 2013 in Warsaw, Virus Bulletin 2013 in Berlin and Yandex YaC in Moscow. There was also a day trip to Paris for a private conference in there somewhere.

Here's my talk from GopherCon:

3. Working on small projects like a bike light that flashes in Morse Code, a Missile Commander Switch, and an Arduino-powered Hallowe'en lantern and releasing new versions of the GNU Make Standard Library.

4. Discovering that the one true way in the gym is the way of the barbell.

1. A revision of GNU Make Unleashed is underway to bring it up to date with GNU Make 3.82 and 4.0 and add chapters covering new topics that readers have asked me about.

3. Plan 28 continues (despite the lack of updates to the web site) and actual work started on intepreting Babbage's Hardware Description Language on June 1. We'll blog about that.

4. Lots of exciting things at CloudFlare that I wish I could blog about today.

And, finally, I might get back to blogging here as well.